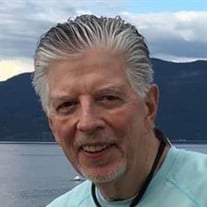 “Tommy J.” passed away from injuries sustained after being struck by a falling tree limb while out on his daily walk on December 21, 2020. Later that day, Tommy’s family was at his side at St. Joseph Hospital. He was able to receive their goodbyes before he passed peacefully. Tommy was born October 7, 1942 in Washington, D.C. to Leo and Savilla Junkersfeld. Tommy was raised in McLean, Virginia, attended Catholic schools, and was a U.S. Senate page during his senior year. He graduated from the University of Arkansas and was a proud Razorback. Tommy was also a huge University of Washington Husky football and Sedro-Woolley High School sports fan. He married Marilyn Elisabeth Beal on December 22, 1984. He worked for many years in sales; in later years at the Mount Vernon Carpet Center. Tommy was a friend of Bill W. for 38 years and a sponsor to many. He and Marilyn have been active members of Sacred Heart Catholic Church for many years. Tommy was preceded in death by his parents, his brother Jerry, and Marilyn’s daughter Mary. He is survived by his loving wife Marilyn Beal-Junkersfeld, sister Keith Sweeney, children Cheri (Noel) Ottaviano, Scott (Melissa) Varady, Sara (Jeff) Willard, and Stacey (Glen) Slick, Tommy’s grandchildren Joanna (Andy), Joshua (Sarah), Daryl, Nathan, Emily, Devin (Alivia), Kailey and Carsten, great-grandson Harrison; Marilyn’s children Jack Jr. (Lori) Ballard and Kelly (Frayne) Ballard, Marilyn’s grandchildren Dexter (Courtney), Kyle (Dannica), Kenny, Erienne and Heather, and many loving relatives and friends. A virtual livestreaming service is scheduled for Sunday, December 27th at 1 PM. In lieu of flowers, memorials may be made to The Lighthouse Mission. You may attend the virtual service and share memories at https://www.westfordfuneralhome.com/obituaries/Thomas-Junkersfeld/.

&#8220;Tommy J.&#8221; passed away from injuries sustained after being struck by a falling tree limb while out on his daily walk on December 21, 2020. Later that day, Tommy&#8217;s family was at his side at St. Joseph Hospital. He was able to... View Obituary & Service Information

The family of Thomas Leo Junkersfeld created this Life Tributes page to make it easy to share your memories.

“Tommy J.” passed away from injuries sustained after being struck...