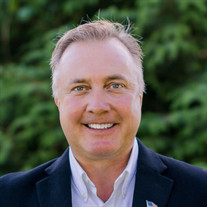 Douglas J. Ericksen passed away on Friday, December 17, 2021, at the age of 52, following a battle with Covid-19. He was born in Bellingham, WA on January 28, 1969 to Rev. Leonard C. and Bettelou (Macdonald) Ericksen.   Doug attended Lowell Elementary and Fairhaven Middle School before graduating with honors from Sehome High School in 1987. During his years as a Mariner, Doug was an outstanding three sport athlete, earning all-state honors in baseball and football. He was also a talented member of the Post 7 American Legion baseball club. Throughout his youth, Doug attended Central Lutheran Church, where his father was the pastor. His favorite family memories included playing sports with his brothers, summer RV adventures, and a special trip with his parents to the Holy Land.   Following high school, Doug attended Cornell University in Ithaca, NY. Doug had fond memories of his time at the Big Red, where he played collegiate football and baseball and was a member of Sigma Chi. Doug earned a bachelor’s degree in Government with a concentration in International Relations from Cornell in 1991.   Doug and Tasha started dating during college after working together at Bellingham Parks and Recreation. Following graduation, they taught English abroad in Southeast Asia and worked in Alaska, igniting a lifelong passion for travel and adventure. They were married in 1998 after a long and adventure filled courtship. Doug and Tasha chose to make their home in Whatcom County, their favorite corner of the planet. Tasha began teaching and coaching in the Bellingham School District as Doug embarked on his career of public service.   After returning to Washington State, Doug earned a master’s degree in Political Science and Environmental Policy from Western Washington University. He began his legislative career while still in college, working in the office of Senator Ann Anderson, whose seat he later held. He also worked for the Department of Fish and Wildlife in Olympia. Both experiences sparked his interest in policy making and inspired him to run for office.   Doug won his first election to the State House of Representatives for Whatcom County’s 42nd Legislative District in 1998 in a closely contested race. His election put the State House into a 49-49 tie for the next three years. He held the position for six terms and was elected to the Senate in 2010. He was proud to serve as the Chair of the Senate Energy, Environment and Telecommunications Committee from 2013-2017. Doug also had the opportunity to serve in national politics during his career as well as work in the international arena in Southeast Asia, Central and South America. He made friends around the world and loved engaging with people from all walks of life. Doug was a champion for the rights of the individual and the rights guaranteed by the state and federal constitutions. He deeply loved this beautiful place he called home and was instrumental in completing numerous projects that benefit the people of Whatcom County.   Doug had a passion for his faith, family and friends, travel, and outdoor adventures, including backpacking, bike camping, golfing, and kayaking. He reveled in taking the road less traveled and finding a great bargain at the thrift shops.  Doug was so proud of his daughters and loved supporting them in their athletic and academic endeavors. A man of many talents, Doug built the family home and a barn to support his kids’ participation in agriculture. He loved spending time on the tractor mowing the pastures on the farm and then relaxing in the hot tub. Every summer, he could be found at parades around the county, waving the American flag and displaying his love for his country. His spontaneity and zest for life, along with his masterful skills on the barbecue grill, will be greatly missed.   Doug is survived by his wife Tasha, his daughters Elsa and Addi, his mother Bettelou Ericksen, brothers David (Nancy) Ericksen and Donald (Sara) Ericksen, and many loving friends and members of his extended family. He was preceded in death by his father Rev. Leonard C. Ericksen.   Doug will be remembered as a fiercely devoted husband and father, a beloved son and brother, an adventurous spirit who fearlessly tackled challenging situations, and a dedicated advocate for the constituents he served and the causes he held in his heart.  A funeral service will be held at Christ the King Community Church, 4173 Meridian St., Bellingham on Wednesday, December 29 at 12 noon PST.   In lieu of flowers, two funds have been created to honor Doug’s legacy. 1) Doug Ericksen Community Legacy Fund - to support community & scholarship needs in Whatcom County 2) Doug Ericksen Family Benefit Account - to support family expenses & college tuition Memorial donation information for both funds can be found at https://www.dougericksenlegacy.com/ Condolences may be sent to the Ericksen family at PO Box 74, Ferndale, WA 98248.   Please share your memories and photos of Doug at https://www.westfordfuneralhome.com/obituaries/Douglas-Ericksen/.

Douglas J. Ericksen passed away on Friday, December 17, 2021, at the age of 52, following a battle with Covid-19. He was born in Bellingham, WA on January 28, 1969 to Rev. Leonard C. and Bettelou (Macdonald) Ericksen.   Doug attended Lowell... View Obituary & Service Information

The family of Douglas J. Ericksen created this Life Tributes page to make it easy to share your memories.