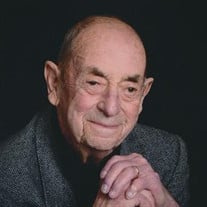 Bill Reiber, age 82, of Bellingham, WA passed away peacefully at Whatcom Hospice House on August 2, 2016. He was born to William and Minnie (Sams) Reiber in Princeton, MN on November 22, 1933. Bill married Judith Pace on November 17, 1973 in Bellingham. He served in the US Army from 1954-1956. Bill was an active member of the Elks Lodge for 48 years and served in many leadership positions, including twice as Exalted Ruler. He was an active member of Trinity Lutheran Church and the American Legion Post #7. Bill worked as a cable splicer for Pacific Northwest Bell for 34 years, retiring in 1990. He later delivered for A-1 Messenger. Bill loved woodworking and made whirligigs and squirrel feeders. He never met a stranger and enjoyed hugs from all the ladies that knew him. Bill was preceded in death by his parents. He is survived by his loving wife of 42 years, Judith; children, Gina’ Wolff, Greg (Lynette) Reiber, Barbara Sharp and Susie (Jeff) Wight; grandchildren, Megan Wight, Mark Wight, Isaac Wolff and Floyd Sharp, and many loving relatives and friends. There will be a visitation from 2-4 PM on Friday, August 12th at Westford Funeral Home. A funeral service will be held at 10:30 AM on Saturday, August 13th at Trinity Lutheran Church, 119 Texas St in Bellingham, followed by a 12 Noon Elks ceremony and reception at the Elks Lodge, 710 Samish Way in Bellingham. Memorials may be made to the Elks National Foundation, Trinity Lutheran Church, or Whatcom Hospice House.

The family of William F. "Bill" Reiber created this Life Tributes page to make it easy to share your memories.