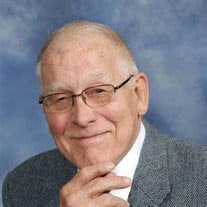 William Keneth Koenig, age 90, passed away early Friday morning, July 19, in Bellingham, WA, following a brief illness. Known to his many friends as Ken, he was born in Foster County, North Dakota, to parents Robert and Frances Koenig. The Depression years led to the loss of the farm and in 1937 he lived with various relatives until being moved to his brother Aloysius Koenig’s home in New York City. Ken attended school in New York City until his sister, Rita and husband Ransom Robbins moved him to their home in Moundridge, KS, where Ken graduated from Moundridge High School in 1943. He attended one semester at Kansas University, then joined the US Marine Corps and was waiting for deployment at the time of the Japanese surrender, thus returning Ken to civilian life. Ken stayed on the West Coast and graduated from St. Martin’s University in Lacy, WA in 1953 with a B.A. in Sociology and Psychology. Ken was employed that year as an elementary school teacher in Kelso, WA. While in Kelso, he studied and received a master’s degree in education in 1982. Throughout his adult life Ken continued scholarly sessions through participation in available studies and love of travel. One summer he joined a geodetic ocean mapping ship crew in order to travel the North Pacific Aleutian Islands. Ken has visited the Holy Land in Israel. He taught elementary school on a US Army Base in Germany where on weekends he could travel to various European sites. Ken’s travels throughout Canada and the US kept him with Koenig aunts and uncles, as well as brothers and sisters. Ken had a passion for Ireland and Irish writers whom he visited while traveling the backroads of Ireland. He made many friends while enjoying various Irish brews at many pubs. At Assumption Church he volunteered with RCIA, tutored students at the school, was active in the Knights of Columbus, and shared his culinary skills at many auction and spaghetti dinners. He was a volunteer for over 20 years at St. Joseph Hospital. In addition to his parents, Ken was preceded in death by brothers, and in-laws, Aloysius Koenig (Helen Liosa Koenig) of Miami, FL., Raymond Koenig, (Dorothy Cox Koenig), of Ft. Smith, AR., and Jerome Koenig of Dewey, AZ; sisters Rita Koenig Robbins (Ransom G. Robbins) of Ponca City, OK, and Rosalyn Koenig Miller of Seattle, WA. Nephews and nieces who preceded Ken in death include Carol Ann Koenig of Miami, FL, Patricia Robbins Bennett of Houston, TX, Ramona Wolf of Portland, OR, and Jerri Ann Koenig of Hutchinson, KS; grandnephew Robert Guerrini of Sulphur, LA and grandniece Patricia Robbins Sawyers of Ponca City, OK. Ken is survived by sister-in-law Carolyn Boyer Koenig of Odenton, MD, nephews Harry Koenig of Miami, FL, and Robert G. Robbins of Ponca City, OK; niece Yvonne Robbins Guerrini of Lafayette, LA, nephew David Robbins of Wichita, KS, niece Rita Robbins Moore of Laguna Vista, TX; nephews, Darell Koenig, of Colorado Springs, Denny Koenig of Mineral Bluff, GA, Robert Marvin Koenig of Leawood, KS, and Michael Wolf of Seattle, WA. Ken loved the visits of nephew Darell Koenig, niece Yvonne Guerrini and grandnephew Lance Koenig, who regularly visited Ken. His grand-nieces Annie Bennett Bullock, and Margaret Guerrini Drouant appeared with surprise visits as may have others. The family is grateful to Ken’s friends, Joe and Kathy St. Hilaire, who saw to Ken’s needs through the passage of years. Ken’s nieces and nephews send our sincere gratitude to Ken’s many friends sharing the journey of Ken’s life of travel, cooking, stories, and adventures. To the caring staff of Orchard Park assisted living facility and the ICU staff at St. Joseph Hospital, we are grateful for your caring compassion. Services will be held at Church of the Assumption on Thursday, July 25th, Rosary at 1:30pm, Mass of Christian Burial at 2:00pm with a reception following. On Friday, July 26th at 12:00pm, committal is scheduled at Holyrood Cemetery in Shoreline, WA. All services will be officiated by Ken’s close friend Fr. John Madigan. A memorial mass will also be held at Immaculate Heart of Mary in Kelso, WA on Monday, August 12th at 6:00pm. To all, please visit www.westfordfuneralhome.com and share your condolences, pictures and memories that we may add to the Koenig Family Tree.

William Keneth Koenig, age 90, passed away early Friday morning, July 19, in Bellingham, WA, following a brief illness. Known to his many friends as Ken, he was born in Foster County, North Dakota, to parents Robert and Frances Koenig. The... View Obituary & Service Information

The family of William Keneth Koenig created this Life Tributes page to make it easy to share your memories.