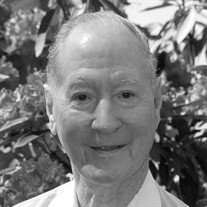 "I love my family." William A. Dingee Sr., known as Bill and B1, said it repeatedly because he meant it: &#8220;I love my family.&#8221; The retired Chicago-area notions salesman who brought his love of family, laughter, lottery tickets, chocolate... View Obituary & Service Information

The family of William A. Dingee, Sr. created this Life Tributes page to make it easy to share your memories.