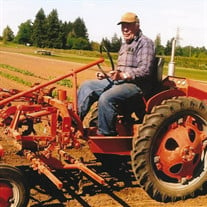 William “Bill” Boxx was born in Van Buren, Missouri on February 8, 1936 and passed away at Christian Health Care in Lynden on January 10, 2020. Bill moved with his parents, Walter and Beulah Boxx, and his brothers, Denny and Jack Boxx, from Van Buren, Missouri, to Whatcom County in 1946. Bill attended school in the Meridian School District. While in high school, he met Charlene Helgeson. They married in 1957. After graduating from high school, Bill worked plastering and stuccoing homes. In 1960, he and Charlene purchased property on the Northwest Road in Ferndale, where they began farming. In the early years of their marriage their strawberry harvest froze and Bill also worked at Mt. Baker Plywood. Bill and Charlene continued farming and built a successful farming business, Boxx Berry Farm, which their family still own and operate today. Bill loved the outdoors and watching his crops grow. He particularly enjoyed growing strawberries. Over the years, the farm transitioned from strawberries and raspberries to also include blueberries and vegetables. The farm developed into a business loved by many in Whatcom County. Bill was a perfectionist and always strived to offer the best fruits and vegetables possible. He was proud of the success of the farm. There was always something that needed to be built or repaired on the farm. Bill had a mathematical and analytical mind. He enjoyed and had a talent for designing and building anything he set his mind to. He and Charlene built the family home. He built trailers and other farm machinery. Over the years, there were many dogs on the farm that Bill dearly loved. Bill had a clever and dry sense of humor. Even at the end of his life, he enjoyed kidding around and telling little jokes with his family and staff at Christian Health Care Center. Bill is survived by his wife of 62 years, Charlene, his children, Vicki, Mike (Crystal), Roger (Vonda) and Kevin, his brother Jack (Judy), his grandchildren, Brandon (Megs), Samantha, Alyssa, Meredith, great-grandchildren, Tyson, Kingston, and Brooklyn. He was preceded in death by his brother Denny. The family wishes to thank the staff at Christian Health Care Center for the wonderful and compassionate care provided to Bill in the final months of his life. We are forever grateful. Memorials may be made to the Whatcom Humane Society or your favorite Alzheimer’s organization. A celebration of Bill’s life will be held at the Mt. Baker Rotary Building, 1751 Front St. in Lynden at 1 PM on Friday, January 31st. You may share memories with the family at www.westfordfuneralhome.com.

William &#8220;Bill&#8221; Boxx was born in Van Buren, Missouri on February 8, 1936 and passed away at Christian Health Care in Lynden on January 10, 2020. Bill moved with his parents, Walter and Beulah Boxx, and his brothers, Denny and Jack... View Obituary & Service Information

The family of William L. Boxx created this Life Tributes page to make it easy to share your memories.