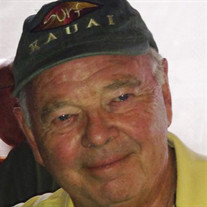 Bill Hutsinpiller, age 81, passed away peacefully on Thursday, March 7, 2019 at PeaceHealth St. Joseph Medical Center in Bellingham. He was born on December 15, 1937 in Seattle, WA to Bill and Martha Hutsinpiller. Bill graduated from Renton High School and later WWU. He married Judy Pearce on August 26, 1961 in Bellingham. He worked as Director of the Parks and Recreation Department in several cities throughout Washington including Yakima, Bellingham, Renton, and King County. Throughout his successful career in public service, Bill received many awards and commendations, including the Honor Fellow Award, the highest award given to someone working in the field of Parks and Recreation. Bill and Judy had two daughters and enjoyed traveling together as well as spending time with family and friends. Bill nourished the people around him with his love and laughter. He is survived by his beloved wife of 57 years, Judy; daughters, Halie Hutsinpiller and Caryl (Ty) Andre; three grandchildren, Brian (Stacey) Goff, Blake (Talena) Morrell, and Cody Morrell, and many loving relatives and friends. Bill will be remembered as a happy, loving, and compassionate light in the lives of his family, friends, and the communities he served during his career. A graveside service will be held at Bayview Cemetery in Bellingham on Monday, March 18th at 11:30 am. You may share memories with the family at www.westfordfuneralhome.com.

The family of William "Bill" H. Hutsinpiller created this Life Tributes page to make it easy to share your memories.