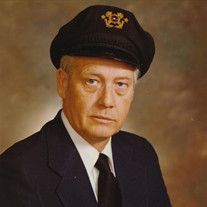 Wayne Dodge was born on Christmas Day (December 25) 1926 in Pleasantdale, Saskatchewan, Canada, to parents Eva Gertrude (nee Conley) and Frederick Dodge. He passed, peacefully on March 27, 2018, age 91, at St. Joseph Hospital in Bellingham, Washington. The family lived in Moose Jaw, and Regina Saskatchewan, and then to Winnipeg, Manitoba, Canada, where he met and married Ivene “Ivy” Lillian Charlotte (Foster) in June 1947. Together they had two children: Diane Moore (Stephen) of Bellingham, and Larry Dodge (Mary) of Oak Harbor. In 1953, the family moved to southern California, where he worked for General Telephone Company in telecommunications. He was proud of the pioneering work he did in telecommunications for the space program, telephone equipment design (he had three patents), and leading a team of communication specialists. He also gave guest lectures at UCLA on these topics. In 1968, the family moved to Tacoma, Washington where he worked for Weyerhauser Corporation as a system analyst in telecommunications until his retirement in 1985. During this time in California he coached little league baseball and became an avid boater in his spare time. He also loved cruising Puget Sound and the Canadian San Juan Islands. He became Commodore for the Day Island Yacht Club and served the Beckenridge Community as a Chairman of the board of directors. At this time he and his wife became snowbirds during the winter months in California and Arizona. In 2002, he and Ivy, married 65 years, moved to Oak Harbor where they continued exploring many parts of the US, Canada, and abroad. Wayne had just recently moved to Bellingham. He will be remembered fondly for nurturing his family and community work. He is survived by his son and daughter, three grandchildren, Michael (Josie) Dodge, Dayna Moore, Jennifer Soames (Dillon) and two great-grandchildren, Quinn and Oren. A memorial service and inurnment will be held on Wednesday, April 4, 2018 at 2pm at St. Paul’s Episcopal Church in Bellingham.

The family of Wayne Frederick Dodge created this Life Tributes page to make it easy to share your memories.