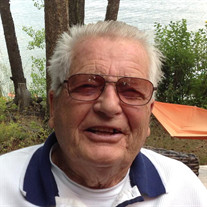 Dr. Warren E. Bergholz, a longtime Bellingham physician, died September 12, 2018. He was 101 years old. Warren was born June 11, 1917 in Chicago, Illinois, and grew up in Portland, Oregon. While in high school, Warren spent many hours before school helping in the family bakery in Portland, and attended the American Baking Institute in Chicago. Warren served in the Army during World War II, and while stationed in Australia, met and married Doris “Dee” Ripoli, an Army Nurse. After the war, with the help of Dee and the GI Bill, Warren attended the University of Washington and its new Medical School, receiving his MD in 1951. Warren and his family moved to Bellingham in 1953 where he began his general practice. Dee passed away in 2000 and Warren subsequently married Jeannie Kearney in 2002. Other than his family and his medical practice, Warren had four all abiding interests: woodworking, his cabin, skiing and sailing. He loved working with his hands. Despite having polio as a child and having weakness in his left arm and hand, he produced beautiful furniture for his home, boat and office. Over the years, he finished a cabin located on Canim Lake in British Columbia. That cabin was a respite for him and has remained in the family for over 50 years. Warren loved to spend time at the cabin working on “projects.” The cabin contained much of his handiwork. Warren also loved skiing and made his own skis when he was in high school. Later he skied frequently at Mt. Baker with his children and he will be remembered as one of the ski patrol doctors. Finally, his prized possession was his sailboat, the Inati. He and Dee spent time just enjoying the local waters and participated in the Bellingham sailing community, regularly racing in the bay and surrounding waters. Warren spent many happy hours sailing with his son Rick. Warren is survived by his wife Jeannie, daughter, Deanne of Tumwater, his sons, Warren Jr. (wife Natalie) of Idaho Falls, ID, and Richard “Rick” (wife Barb) of Olympia, WA, Jeannie’s children Michael (wife Laura), Jerry and Karla (husband Kevin), 9 grandchildren and 17 great-grandchildren. In lieu of flowers, memorials may be made to the Dee Bergholz Music Scholarship Endowment at WWU, c/o WWU Foundation, 516 High St., OM 430, Bellingham, WA 98225. A Service of Remembrance will be held at Westford Funeral Home on Saturday, September 22nd at 12 Noon followed by a reception at the Assumption Church gym.

Dr. Warren E. Bergholz, a longtime Bellingham physician, died September 12, 2018. He was 101 years old. Warren was born June 11, 1917 in Chicago, Illinois, and grew up in Portland, Oregon. While in high school, Warren spent many hours before... View Obituary & Service Information

The family of Dr. Warren E. Bergholz created this Life Tributes page to make it easy to share your memories.