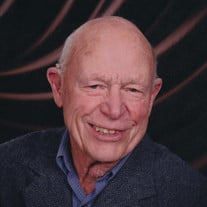 Walter E. Deming, longtime resident of Whatcom County, passed away April 28, 2020. Walt was 97, born in Longmont, CO on February 8, 1923 to Wallace and Lucia Deming. After graduating from Longmont High School, Walt joined the U.S. Coast Guard. He served on the USS Evergreen in Greenland during WWII, crossing the Arctic Circle in September of 1944. After Walt’s honorable discharge from the Coast Guard he worked nights in a lumber mill while he earned a pilot’s license. He worked in the commercial fishing industry in Alaska and worked for over thirty years on tug boats, first for Bellingham Tug and Barge then Foss Maritime as a deckhand/engineer. Walt and his wife Maxine purchased their home on Slater Road in 1962, where they raised their family. Maxine passed away in 1985. Walter married Evelyn Arnold in 1988 and they honeymooned in New Zealand and Australia. Walt was able to summit Ayers Rock. Evelyn passed away in 2003. He had a love for the outdoors from the time he was a boy. Walt shared with his family stories about many camping and fishing trips with his brother Henry. He enjoyed many years of fishing and camping in the United States and Canada with his daughter Lucia and her husband Steve, along with friends of sixty years, Ron and Twila Rittenberg. Walt’s love of geology included the quest for gold, a quest he shared with Carol’s husband Joe. He spent many an hour, gold pan in hand, in cold river waters. Walt lived on Slater Road until moving to town in 2016. His grandson Brett, was a great help to Walt in his last few years on his farm. Walt was a former member of the Whatcom County Cattleman’s Assoc., Mt. Baker Beekeepers Assoc., Mt. Baker Rock and Gem Club, and the North Bellingham Grange. He was a member of St. Paul’s Episcopal Church for over 60 years. Walt is survived by his daughters, Lucia (Steve) Smith, Cathie Applegate, Christine Smith, and Carolyn Langston and adopted son Stanley Martin; 9 grandchildren, and numerous great and great-great-grandchildren, relatives and friends. The family wishes to thank Ingrid of Louisa Place for her special care of and show of respect for our dad. We'd also like to thank the entire staff of Whatcom Hospice House. They made a difficult situation easier. Memorials may be made to Whatcom Hospice House or to the St. Anne’s Guild at St. Paul’s Episcopal Church. Visitation will be held at Westford Funeral Home on Monday, May 4th from 1-3 PM. A private family burial service with military honors will be held. You may share your memories of Walt at www.westfordfuneralhome.com.

The family of Walter Eric Deming created this Life Tributes page to make it easy to share your memories.