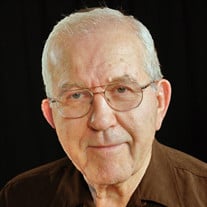 Wallace W. “Wally” Vaux, age 86, passed away peacefully on Monday, November 14, 2016. He was born on July 13, 1930 in Algona, Iowa to Theodore and Eunice Vaux. Wally spent his childhood in Ashton and Stillman Valley, Illinois, where his father was the basketball coach. The family moved to Whatcom County when he was 16 years old. Wally worked for Seattle City Light at their Skagit project before being drafted into the U.S. Army. Upon returning from the Korean War, he married Marilyn Schneider on May 9, 1953 in Seattle, WA. He enrolled at the University of Washington where he earned a B.S. in Mining Engineering and Marilyn worked to support his education. Upon graduating he worked at San Manuel Copper in San Manuel, AZ and as an engineer for Kennecott Copper in Salt Lake City and for Hecla Mining at their uranium mine in Moab, Utah. He returned to Seattle and Wally worked for King County Engineers until accepting a job with Kaiser Cement as superintendent at their quarry near Maple Falls, WA. He later worked in consulting and as an explosives engineer in the Northwest and Alaska. Wally belonged to the American Mining Association and the Association of Explosives Engineers. He loved working in the outdoors and exploring wherever he was living. Wally was a devoted family man and he dearly loved his wife and children, who were fortunate to have been able to accompany him on some of his projects in Eastern Washington. He is survived by his loving wife of 63 years, Marilyn, daughter Julie (husband Kim) Koppenberg of Monroe, WA, son Brad (wife Joan) Vaux of Yakima, WA, grandchildren Jamie Koppenberg, Aileen Keown Vaux, Carling (husband James) Boyer and Graham Vaux, sister Phyllis Smith, and many loving relatives and friends. Mass of Christian Burial will be held at Sacred Heart Catholic Church at 11 AM on Friday, November 18th. Reception following. You may share memories with the family at www.westfordfuneralhome.com.

The family of Wallace W. Vaux created this Life Tributes page to make it easy to share your memories.