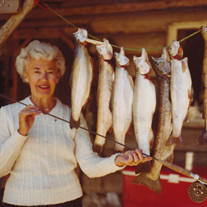 Virginia “Virgie” Boal Hayden passed away peacefully at the age of 98 on September 26, 2016 at her home in Bellingham, WA. She was born on April 30, 1918 in North Platte, NE to parents William Cody Boal and Elva Day Boal. She moved to Bellingham at age four. Virgie was a lifelong resident of Bellingham attending the Campus School, Fairhaven High School, and graduated in 1939 from Western Washington College of Education. Virgie taught kindergarten and first grade at Clearbrook Grammar and two years at Lincoln School in Mount Vernon. On August 13, 1943 Virgie married Robert “Bob” Hayden in Bellingham. After the war in 1945, Virgie and Bob started a flying service with Chuck and Dick Wilson at the Bellingham Airport. Virgie got her flying license in 1947 and continued to fly through the 1990s. Virgie and Bob bought the BB Grocery Store on State St. in 1947. This started their long career in the grocery business. In 1956, the Hayden Thriftway Store in Fairhaven was opened. In 1968 they built the first Quik-E-Mart and eventually built six stores. In 1971 Mark-It Foods was established on Meridian Street and in 1975, the first Cost Cutter store, Everson Thriftway and Toy Store was added. Virgie and Bob retired in 1989 after 42 years in the grocery business. Virgie will always be remembered for her generosity, entertaining her family and friends and her fabulous cooking. She loved dogs, especially her cocker spaniel, Zoomie, and a favorite Boston terrier, Valentina. In addition to being a pilot, Virgie was an avid snow and water skier, tennis player, scuba diver, golfer, hiker, and fisherwoman. Up into her early 90s she continued to fish, swim and take her daily walk. She loved to travel, and visited all seven continents. She spent many happy years as a “snowbird” living in both Bellingham and Indian Wells, CA. Virgie was proud to be the great-granddaughter of Buffalo Bill. She served for many years on the Board of Trustees of the Buffalo Bill Museum located at the “Buffalo Bill Center of West” in Cody, Wyoming. Virgie was preceded in death by her husband of 59 years, Bob Hayden, her brother, Horton Boal, and her sister-in-law, Etta Boal. She is survived by her two nieces and nephew, Pat Jones (Tom), Bill Boal (Jeri) and Cheryl Boal, and many great-nieces, nephews and cousins. In lieu of flowers, memorials may be made to Whatcom Hospice, 2901 Squalicum Parkway, Bellingham, WA 98225 or the Whatcom Humane Society, 2172 Division St., Bellingham, WA 98226. A special thanks goes out to the Hospice staff and all of Virgie’s dedicated caregivers, especially Marie and Gail. A private Celebration of Virgie’s Life will be held at a later date. You may share your memories with the family at www.westfordfuneralhome.com.

The family of Virginia Boal Hayden created this Life Tributes page to make it easy to share your memories.

Virginia “Virgie” Boal Hayden passed away peacefully at the age...