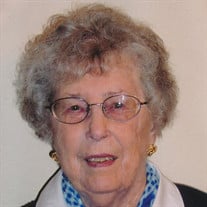 Violet Celestine Carlson, age 97, passed away peacefully in Lynden on Thursday May 24, 2018. She was born October 31, 1920 in Olmitz, Ohio to Frank & Emilienne Guckert. As a child she lived in Ohio, Iowa, Illinois and Paris, France. After moving back to the United States from France the family settled in Everson, WA and Violet graduated from Mt. Baker High School. Violet married O. Irving Carlson on Oct. 5, 1939 and together they farmed on the Halverstick Rd. First as dairy farmers then as Certified Seed Potato Growers until retirement in 1982. Violet and Irving raised three children on that farm, Bud, Diane and Lynn. Violet was a caring mother, grandmother and auntie. She enjoyed quilting, sewing, gardening, traveling and camping. She made sure each granddaughter had a quilt that she made. The farm on the Halverstick Rd. always had red and white petunias lining the driveway and she had a love/hate relationship with her huge garden that always needed weeding. There were trips to the Philippines, Hawaii and Portugal among other places. She and Irving would sometimes take the camper on last minute camping trips. They also had a lot on Lummi Island for such get-a-ways. She was a lifetime member of Clearbrook Lutheran Church serving as a Sunday School Teacher and, alongside Irving, a Luther League Counselor. Violet was preceded in death by first husband O. Irving Carlson in 1992, second husband Fred Evans in 2011, son Bud Carlson, daughter Diane Fruin, brother Henry Guckert and sister Anna Easton. She is survived her son Lynn (Judy) Carlson, daughter-in-law Carmen Carlson, grandchildren, Vicki (Randy) Lindquist, Debbie Mauer (Steve Rainer), Franklin Carlson, Brandon (Kelly) Carlson, Heather (Chris) Glenn, great-grandchildren Brent, Kelsey, Cody, Brittney, Max, Matt, Liz, Tim and Freya, five great-great-grand-children, brother-in-law Jim Easton and sister-in-law Eugenia Guckert. A celebration of life will be held later this summer. You may share memories with the family at www.westfordfuneralhome.com

Violet Celestine Carlson, age 97, passed away peacefully in Lynden on Thursday May 24, 2018. She was born October 31, 1920 in Olmitz, Ohio to Frank & Emilienne Guckert. As a child she lived in Ohio, Iowa, Illinois and Paris, France. After... View Obituary & Service Information

The family of Violet Carlson Evans created this Life Tributes page to make it easy to share your memories.