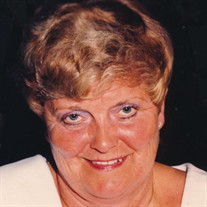 Viola Jacqueline Fisher Zurline, life-long resident of Bellingham, died on Tuesday, March 24, 2020 from complications of old age. Born March 18, 1927, Vi passed away just a few days after her 93rd birthday. Vi was born in Kimberly, B.C., moving to Bellingham at the age two with her parents Alfred and Donna Fisher. Vi grew up humbly in the Valencia neighborhood and attended Bellingham public schools, including Bellingham High School. Although gifted in mathematics, Vi did not attend college but went to business school. She worked at Morse Hardware Company, St. Paul's Episcopal Church, and the Post Office. Vi met and married Frank "Moose" Zurline, a decorated WWII veteran and a student athlete at Western Washington State College, at age 21. Together they raised two children, Nancy (Wutzen) and Frank, Jr. (both graduates of Washington State University), enjoying many happy years in their close-knit neighborhood on Park Ridge Road above Fairhaven Middle School. Vi and Moose together were quite a team both in seeking their fortune through hard work and in their contributions to the Bellingham community. In their early years Vi was the supportive wife, offering encouragement to Moose as a teacher at Edison, a salesman at Bellingham Hardware, and then in business operating "Moose's" Appliances. As a gifted salesman, Moose earned many incentive travel trips for the family. Family legend has it that Vi was so excited and thrilled to travel that she sought out the opportunity to work in the travel industry. She started at Bellingham Travel in the late 60's, working for Mr. Jay West, when it was a two-person operation. In short order, Vi and her friend Nan Piovesan purchased Bellingham Travel from Mr. West, and grew the company to employ 10 people. In the late 70's Nan sold her interest in the business to Frank, Jr. The 1980's saw the deregulation of the travel industry and the beginnings of automation. It was also the "Golden Age" for travel agencies as people discovered the joys of travel to Hawaii, Mexico and cruising on the "Love Boat." With Vi and Moose as promoters and leaders of customized group travel, and Frank, Jr. with an interest in computer automation, Bellingham Travel grew to employ 22 people. By 1985, Vi and Moose and Frank and wife Christine partnered to fulfill one of Vi's dreams: to build a commercial building in downtown Bellingham. Vi had a very active professional and community life in a time when women in Bellingham were not in the forefront of the business community. She was the first woman President of the Bellingham Whatcom Chamber of Commerce, was a member of Soroptomist International, served on the Western Washington University Foundation, was a co-founding president of Sarah Debra Auxiliary to St. Joseph Hospital, to name just a few of her community endeavors. Vi sometimes observed that she was the only woman on a particular committee and made it her personal mission to encourage other women to rise to the top of their field and participate. Vi received numerous awards for her success in business, including Whatcom Women in Business Woman of the Year and the Lifetime Achievement Award from the Bellingham Whatcom Chamber of Commerce. Vi and Moose appreciated the power of sports and higher education to enrich and create opportunity. They were active boosters of WWU sports (especially football), and together in the 1990's, they created the Moose Zurline Scholarship Fund through the WWU Foundation. Vi and Moose believed in small business, setting goals and working hard to accomplish them. They encouraged their daughter Nancy in her business Northwest Kennels. It tickled Vi to see others' success. She supported budding and established local artists and was always slipping a fifty or a hundred dollar bill to friends and relatives embarking on a voyage or trip. Vi was fun-loving, honest and direct and recognized that she did not accomplish her goals without a lot of help from her family and staff. In her later years she lived with her daughter Nancy and in the last 18 months she lived at Brookdale Senior Living and Silverado Care Center. She was always very grateful and thankful for the help she received from all her care givers, repeatedly thanking them. Vi was a woman of faith and an active member of St. Paul's Episcopal Church. She was over the moon when she became a grandmother in 1989 and was devoted to her granddaughter Abby. She believed in helping others and was generous of spirit and treasure. She is survived by her daughter Nancy Wutzen of Birch Bay, son Frank Zurline Jr. (wife Christine) of Bellingham, and granddaughter Abigail Zurline of Costa Mesa, California. She is also survived by her niece, Diane (Dan) Quall, nephews Larry (Susie), Bobby (June), and Marty (Kari) Weis and their families, cousins Tom (Pat) Jones, Bob (Gail) Afleck, and close family friend Gerrit Loman. She was preceded in death by her husband, Frank "Moose" Zurline, son-in-law James "Woody" Wutzen, her sister Grace Fisher Weis and brother-in-law Bud. The family is grateful for the care Vi received at Brookdale, Silverado, and the caring end of life guidance of Hospice. Memorials may be made to the Frank "Moose" Zurline Scholarship at: WWU Foundation, Old Main 430, 516 High Street, Bellingham, WA 98225 or the charity of your choice. Vi was laid to rest next to Moose and Woody at Bayview Cemetery in Bellingham. Vi always enjoyed a good party and family plans a gathering to celebrate her life at a later date. Rest in peace, Vi. You may share your memories of Vi at www.westfordfuneralhome.com.

The family of Viola J. Zurline created this Life Tributes page to make it easy to share your memories.