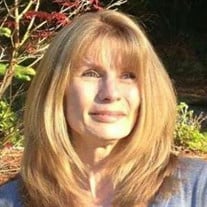 Victoria Ann Nelson, of Bellingham, WA, while surrounded by the love and warm touch of her family passed away on Sunday, November 8th 2015. Vicki was 62, born on June 5th 1953, In Harvey, IL to Lily (Blits) and Louis Bockstahler. Vicki is survived by her husband Stephen, whom she married in 1980 in Mount Baldy, CA.; son Matthew Nelson; daughter Megan Nelson; grandson Bentley Greigg; brothers, Bob and Richard Bockstahler; sisters, Marilyn Bockstahler and Danielle Smith and many nieces and nephews. She was the eldest daughter of 5 children. Her father Louis was a Lt. Col. In the U.S. Army taking the family to many cities throughout the U.S. as well as Europe throughout his career. Vicki attended an all-girls Catholic school followed by Chaffey College. It was when she began working in the medical field that she met Steve, whom she married 2 years later. In 1981 Vicki gave birth to her much anticipated son, Matthew. Although nothing prepared her for how challenging he would be as a baby. She always said he was lucky he was cute. Despite the sleepless nights they enjoyed life to the fullest and traveled across the U.S. In January of 1985 they expanded to a family of 4 with the birth of her daughter Megan, also known as the "easy" child. That is until she could talk, according to Matt. Vicki has been nothing short of spectacular in her devotion to her kids, sharing the ups and downs all while being steadfast in their corner as a mother who would do anything for them. She has been a beacon of encouragement and support throughout their lives all while pursuing her own career in office and project management, which ranged from surgery/medical centers to commercial real estate and marketing. However, her true passion was with interior design and refurbishing old furniture. While design fulfilled her creative side she always said being in nature and walking was food for her soul. Covering the miles of walking trails throughout Whatcom County brought the balance needed to her long workdays. With the arrival of her first grandchild, Bentley, in March of 2012, her sense of family took on an entirely new meaning. Embracing him into her ever present motherly devotion and love. Her compassion did not stop with just her immediate family. She was a large advocate for anyone that needed help or guidance in life. Vicki was a second mom to many of Matt and Megan's friends. Opening her heart and her home to them. Upon receiving her diagnosis she was adamant about donating a sizable portion of the funds raised for her cancer treatments to DVSAS, saying if so many people are willing to help me without even knowing me then I want to help others too. She always truly lived the "pay it forward" lifestyle. Throughout her battle she kept a positive fighting mind frame, showing her true internal strength. Despite her diagnosis Vicki and her family spent as much time together, filling their days with stories, laughter, love, and creating memories that they will cherish for a lifetime. On November 8th our beloved Vicki greeted death as an old friend and found peace in this world. Her spirit stayed so strong in even the darkest of times and has been a true inspiration for the depths of strength and love one can possess. She loved and touched so many lives in this world, and will always live on in the hearts and stories told for generations to come. Her gratitude, as well as ours, for the immense outpour of support from family, friends and strangers, is, was and will always be undying. A celebration of life will be held at 2PM on Sunday, November 22nd at Westford's Broadway Hall, 1300 Broadway St.

Victoria Ann Nelson, of Bellingham, WA, while surrounded by the love and warm touch of her family passed away on Sunday, November 8th 2015. Vicki was 62, born on June 5th 1953, In Harvey, IL to Lily (Blits) and Louis Bockstahler. Vicki is... View Obituary & Service Information

The family of Victoria Ann Nelson created this Life Tributes page to make it easy to share your memories.

Victoria Ann Nelson, of Bellingham, WA, while surrounded by the...