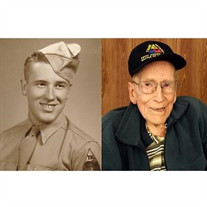 Vernon L. Tweit passed away on June 13, 2017, a lifelong resident of Bellingham. Vern was born to Andrew and Clara (Benseth) Tweit on June 8, 1923. He attended Lowell and Fairhaven schools and graduated from Bellingham High School in 1941. He was drafted into the U.S. Army in 1943 and proudly served his country as a tank commander in the 736th Tank Battalion (nicknamed “The Kid Battalion”) and was awarded a Purple Heart. After being honorably discharged from the Army in 1945 he met Doris Anderson, and they were married in Bellingham on July 24, 1948, and they celebrated 65 years of marriage before Doris passed away in 2014. Vern and Doris enjoyed the company of their large and lucky family and happily spent their “golden years” enjoying the activities of their children and grandchildren as well as traveling to annual reunions across the USA to reunite with their 736th family. Vern served as president of the Kid Battalion for many years and eagerly helped organize their reunions and happily recollected their years together through the articles and poems he wrote for their newsletter “The Gizmo.” He loved honoring those who had passed before him and to recall their experiences from Camp Rucker, Fort Knox, Camp Bouse and South Wales to the front lines in Europe where they crossed the Rhine River at night in their tanks. Vern also enjoyed puttering and woodworking, from making dollhouses and rocking horses to being “Mr. Fix-It” to anyone who asked. He was proud to be a member of American Legion Post 7. Vern loved his family and his family loved him. He was predeceased by his parents, sister Elaine, and wife Doris. He is survived by his sister Jeanne Tweit, daughter Patricia Scott and sons Douglas (Robin) and Murray (Donna) Tweit. He leaves 8 grandchildren, James (Kristen), Holly, Ryan (Tara), Tyler, Rendi (Jason), Grady (Alicia), Landy (Kevin) and Jessy (Rose). He also leaves 15 great-grandchildren Ebba, Duncan, Abi, Kira, Jaxon, Malin, Zoey, Piper, Mackylnee, Gunnar, Ryder, Owen, Sophie, Marion and Cora. He also leaves behind his Ford cousins who were raised as siblings, and many loving relatives and friends. Vern’s family would like to thank all of the thoughtful and loving caregivers at Summit Place Assisted Living and Mt. Baker Care Center for the exceptional care of our Dad and Grandpa. There will be a graveside service with military honors on Tuesday, June 20th at 10 AM at Bayview Cemetery followed by an 11 AM memorial service at Our Saviour’s Lutheran Church. Reception following at the church. Memorials may be made to Vern’s lifelong church, Our Saviour’s Luthern Church, 1720 Harris Ave., Bellingham, WA 98225. You may share memories with the family at www.westfordfuneralhome.com.

Vernon L. Tweit passed away on June 13, 2017, a lifelong resident of Bellingham. Vern was born to Andrew and Clara (Benseth) Tweit on June 8, 1923. He attended Lowell and Fairhaven schools and graduated from Bellingham High School in 1941. He... View Obituary & Service Information

The family of Vernon L. Tweit created this Life Tributes page to make it easy to share your memories.