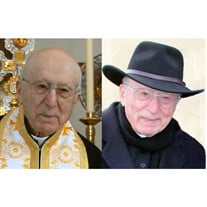 It is with joyful sorrow that the Greek Orthodox Metropolis of San Francisco announces the passing of V. Rev. A. Photius Pentikis, who fell asleep in the Lord on January 25, 2017 at the age of 94 years old. Father Photius enjoyed a full and rich life and ministry, living alone until more recent months when his health began to fail rapidly. “Father Photius was a devoted servant of the Lord for nearly 70 years, always maintaining the highest standards for his priesthood in the many parishes he served,” noted His Eminence Metropolitan Gerasimos of San Francisco. “I had the opportunity to be with Father Photius this past September and was always uplifted his genuine spirit.” Father Photius was born in Fort Worth, Texas on July 16, 1922, and lived there with his family until he completed high school. He then enrolled in Holy Cross Greek Orthodox School in Pomfret, Connecticut and was ordained in 1948. Father Photius also studied at the historic Halki Theological Seminary in Turkey, and served as Deacon to the late Patriarch Athenagoras. He served numerous parishes in the west including: Holy Trinity in Portland, OR; Holy Trinity in Phoenix, AZ; Saint Nicholas in Northridge, CA; Assumption in Seattle, WA; Saint Spyridon in San Diego, CA; Saints Constantine and Helen in Honolulu, HI; Saint Nicholas in San Jose, CA; and Saint Sophia in Bellingham, WA. Father Photius was always conscientious in his ministry, and devoted of himself unselfishly for the spiritual edification of the faithful he served. A voracious reader, Father Photius’ home was filled with books and he was always eager to learn. He also wrote extensively, including an unpublished extensive synopsis on the Gospel of Matthew. Father Photius never wanted any recognition for his years of devoted service to the Greek Orthodox Church. Though he was hesitant to agree, the parish of Saint Sophia in Bellingham was planning to recognize him during the weekend of Sunday of Orthodoxy in March 2017 during a forthcoming visit by His Eminence Metropolitan Gerasimos of San Francisco. Since his retirement, Father Photius resided in Bellingham, WA and was blessed to have the care and friendship of Rev. Father Mel Gimmaka and his family, with whom he formed a very close bond for the past 20 years. All services for Father Photius will be held at Saint Sophia Greek Orthodox Church, 510 East Sunset Drive in Bellingham. The Trisagion will be prayed on Tuesday, January 31 at 7:00 p.m. His Eminence Metropolitan Gerasimos will officiate at the Funeral Service on Wednesday, February 1 at 11:00 a.m., preceded by Orthros at 9:00 a.m. and Divine Liturgy at 10:00 a.m. Interment will follow at Bayview Cemetery, followed by the traditional Makaria meal at the Church. In lieu of flowers, donations in memory of Father Photius may be offered to Saint Sophia Greek Orthodox Church, 510 East Sunset Drive, Bellingham, WA 98225 or to Saint Innocent Antiochian Orthodox Church, 7461 Goodwin Road, Everson, WA 98247. May his memory be eternal! You may share memories with the family at www.westfordfuneralhome.com.

It is with joyful sorrow that the Greek Orthodox Metropolis of San Francisco announces the passing of V. Rev. A. Photius Pentikis, who fell asleep in the Lord on January 25, 2017 at the age of 94 years old. Father Photius enjoyed a full and... View Obituary & Service Information

The family of V. Rev. A. Photius Pentikis created this Life Tributes page to make it easy to share your memories.

It is with joyful sorrow that the Greek Orthodox Metropolis of...