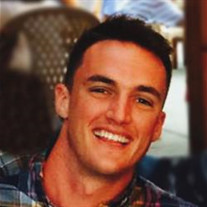 Todd William McClure of Bellingham, WA passed away in his sleep at home on Saturday, January 7, 2017. Todd, 27, was born in Bellingham on March 5, 1989 to Jeffrey and Debra (Williams) McClure. He attended Bellingham Schools, graduating from Sehome High School in 2007. Todd later earned a BA in Business from Seattle University. Todd was a compassionate and caring person, with an engaging personality and a quick wit. His life was filled with many people who cared for him deeply. Todd possessed a great sensitivity and, in spite of outward appearances, could tend to carry the weight of the world on his shoulders. He was fascinated by the personal stories of others that formed the basis of their life circumstance. He spent much of his short life trying to discover those stories. Todd was fair minded and had little tolerance for those who did not speak the truth. He was baptized and confirmed in the Lutheran Church, and preferred to live out his faith in the world through his relationships with friends and strangers alike. Todd was an intrepid traveler. He found peace when able to immerse himself in other cultures, particularly in Asia. During college, he spent a year studying and traveling in China, with the ultimate goal of pursuing a career in business there. At the conclusion of his year abroad, he took a detour to Cambodia and eventually to Viet Nam where he purchased a motorcycle and travelled the backroads alone from Saigon to Hanoi. He considered it one of his greatest life adventures. Upon graduation from Seattle University, Todd worked briefly in the fishing industry at a remote outpost in Akutan, Alaska. Recognizing his desire to be closer to family and friends, he moved back to Bellingham and most recently worked as a loan analyst for a financial company with ties to foreign investment in Asia. Todd enjoyed the varied and beautiful landscapes of the Pacific Northwest: hiking, snowboarding, all manner of water sports…he enjoyed them all. But possibly his favorite activity included road trips along the coast with his girlfriend Erika to visit his sister and friends in California. Todd was a progressive thinker, always challenging the norms of conventional wisdom. His desire to filter out the noise of the world and distill its essence into basic life truths permeated his existence. At the same time, he was conventional to the core in that he was deeply rooted in the importance of family and the traditions they celebrated together. He was preceded in death by his grandmother, Erna Williams. He is survived by his parents; his sister Britta McClure; his grandparents, William R. Williams, Ray and Merilyn McClure and many uncles, aunts, and cousins. A memorial service and celebration of Todds’ life will be held at 2:00 PM on Saturday, January 21, 2017 at Faith Lutheran Church. A scholarship fund supporting behavioral health education in our community has been established in Todds' name. Donations may be directed to the Todd McClure Scholarship Fund at Chuckanut Health Foundation, P.O. Box 5641, Bellingham WA 98227. You can share memories of Todd at www.westfordfuneralhome.com.

Todd William McClure of Bellingham, WA passed away in his sleep at home on Saturday, January 7, 2017. Todd, 27, was born in Bellingham on March 5, 1989 to Jeffrey and Debra (Williams) McClure. He attended Bellingham Schools, graduating from... View Obituary & Service Information

The family of Todd W. McClure created this Life Tributes page to make it easy to share your memories.

Todd William McClure of Bellingham, WA passed away in his sleep...