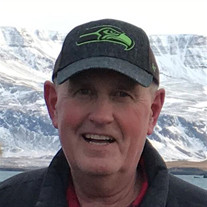 Tod Arnason of Nooksack, WA died peacefully June 6, 2018 at the age of 64. He was born on January 7, 1954 to Hal, Jr. and Donna “Donnie” (Valdason) Arnason in Bellingham. Tod graduated from Sehome High School in 1972 and earned his AA at Skagit Valley Community College. He worked as an operator at Intalco for 29 years. Tod was an active member of the Everson Lions Club and was a Nooksack Cemetery Commissioner. He enjoyed walking and hiking in the Northwest, traveling and mapping his routes along the way. Tod loved spending time with his children and grandchildren and cheering them on at every sporting event. Tod was preceded in death by his parents, Hal, Jr. and Donna “Donnie”. He is survived by his loving wife Virginia, children Alyssa (Eugene) Brooks, Trever Arnason (Bethany), Jordan Arnason (Emily), and Nicole (Adam) Burke, grandchildren Jaida, Peyton, Kolbi, Hannah, Mickayla, Aubrey and Declan, siblings Hal Greg (Darla), Kim (Margo), Shelli Lentz (Roy), and Kathi Berry (Michael). He is also survived by many nieces and nephews, relatives and friends. In lieu of flowers, memorials may be made to the Everson Lions Club in Tod’s name, 6574 Lawrence Rd, Everson, WA 98247. A graveside gathering for close friends and family will be held at Nooksack Cemetery on the Breckenridge Rd. at 11 AM on Saturday, June 16th. You may share memories with the family at www.westfordfuneralhome.com.

The family of Tod J Arnason created this Life Tributes page to make it easy to share your memories.