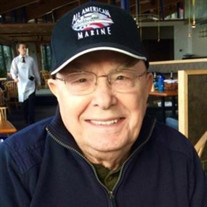 Theodosios “Theo” Kipelidis, age 93, entered into eternal peace early Saturday morning, February 20, 2021 at his residence in Bellingham. Theo was born April 16, 1927 in Kavala, Greece to Evangelos and Sotiria Kipelidis. His education was cut short by World War II. He worked hard from a young age to support his family and was a veteran of the Royal Greek Army against the communists during the Greek civil war. In 1958, he married Eleni Prodromidou and later had two children, Evan and Susan Kipelidis. Theo dreamed of a better life for his family. In 1966, they immigrated to Kitimat, B.C., Canada and later came to Bellingham, WA, in 1975. Theo was a kind and gentle soul who devoted his life to his family. He never spoke ill of anyone. Almost every summer, Theo would return to his hometown of Kavala,Greece. He enjoyed swimming, the sunshine, eating fresh fish and socializing with his childhood friends. Theo loved playing and watching soccer. AEK was his favorite team. As for football, Theo was a diehard Seattle Seahawks fan and favored the team since its inception. He leaves his loving memories to be cherished by his wife, Eleni, his son Evan (spouse Despina) and daughter Susan (spouse Issam), sister Maria Ilvanakis, 4 granddaughters Christina and Marialena Kipelidis, Fahren and Celaina Mansour and great-grandson Gregory Kipelidis, along with several nieces and nephews. Services will be held on Thursday, February 25, 2021 at 10:30am at St. Sophia Greek Orthodox Church. Burial service will follow at Bayview Cemetery. Fr. Michael Tervo will be officiating. Share memories with the family at www.westfordfuneralhome.com.

The family of Theodosios "Theo" Kipelidis created this Life Tributes page to make it easy to share your memories.