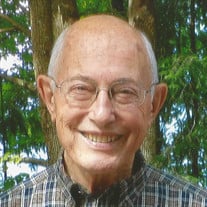 Theodore “Ted” J. Mastor, age 85 of Bellingham, WA, passed away on Saturday, December 3, 2016 with his wife Bev at his side. Ted was born to John and Rena Mastor on December 21, 1930 in Everett, WA. He graduated from Bellingham High School, class of 1948, and served in the U.S. Air Force at Murphy Dome, Alaska, during the Korean War. He enjoyed cars, boating, trapshooting, and hunting in his early years. Ted also worked at the original Bellingham Public Market, was a business owner, and worked at Hawley’s Marina. While working at Kesselring Gun Shop for 23 years, many of his customers became his friends. He loved to watch football games with his son Eric and spend time with his extended family, many of whom called him “Papa”. Most importantly, he loved to follow Bev around their home shutting off the lights. Ted was preceded in death by his son Mark, and parents John and Rena Mastor. He is survived by his best friend and wife Bev, his son Eric Mastor (Cat Enright); twin daughters Leslie (Tom) Lindberg and Lisa (Gregg) Reynolds; stepson Mike (Janine) Bergeron, stepdaughter Patti (Marv) Simonsen; grandchildren Adam, Ashley, and Lauren Lindberg, Isabel and Margot Enright-Down, Garrett Reynolds, Jessica (Lee) Martineau, Jeff Simonsen, Stephanie Simonsen (Clayton), Kasey Simonsen (Eric), and Chase (Elysia) Bergeron; and great-grandchildren Charley and Maggie Martineau, Taylor, Lane, Little Chase, Charlie, and Syd. Thank you to Dr. Eric King, Kim Enfield, and Katherine Carmichael for their expert care and kindness during Ted’s final months. Visitation will be held at Westford Funeral Home on Tuesday, December 6th from 2-4 PM. A graveside service will be held at Bayview Cemetery on Wednesday, December 7th at 11 AM. You may share memories with the family at www.westfordfuneralhome.com.

The family of Ted J. Mastor created this Life Tributes page to make it easy to share your memories.