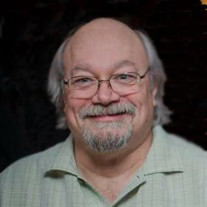 It is with heavy heart that we mourn the passing on June 12, 2018 of Steven Haffner of Bellingham. Steve was born July 21, 1953 to Charles and Angelina (D’Andrea) Haffner. After spending his early years on various naval bases, his father retired in 1960 and the family settled in Bellingham. Steve grew up near Chuckanut Bay in a close-knit community. In school, he made long-lasting friends, something he continued to do throughout his life. On April 28, 1989, he married Sylvia Bertels in Bellingham. Steve began working for the US Postal Service as a rural mail carrier in 1988. He enjoyed his job, especially his customers, until he was injured in 2007 resulting in his retirement. During his years on the job, he and Sylvia would participate in the annual Letter Carriers’ Food Drive, often picking up another route in addition to his. After his injury, he was unable to participate for a few years, but returned to help as soon as he could. Steve was predeceased by his parents and a twin brother, who was stillborn. He is survived by his wife, brother Don Zangari (wife Renee), and many loving cousins, nephews and nieces. Steve was a die hard sports fan who loved the Mariners and Seahawks. He loved Bellingham (especially Chuckanut), where he always felt his roots were and where he belonged. He felt he hit the jackpot when he was able to buy the place by Chuckanut Bay where his grandfather once lived. He enjoyed 29 years there with his wife Sylvia. He enjoyed indulging in his love of art, history and food while traveling the world. He took his wife to Europe for six weeks in the spring of 2016, celebrating their 27th anniversary in Paris. It was his last trip before he fell ill. Steve was always a stalwart companion, friend and peacemaker. His perseverance in life showed his hidden courage and determination. He collected friends wherever he went. His natural tendency was toward open-mindedness, curiosity, humor, and optimism. His mission, every day, was to make the most of life as it actually existed. Carpe Diem (seize the day) was his mantra and he did just that. He could find the silver lining in any dark cloud; he always said he was the luckiest man on the face of the earth. Steve brightened so many lives and left the world a richer place. We are the lucky ones to have known him and he will be sorely missed. There will be a celebration of Steve’s life on July 21, 2018 at his home, starting at 2pm. Share your memories of Steven with the family at www.westfordfuneralhome.com.

It is with heavy heart that we mourn the passing on June 12, 2018 of Steven Haffner of Bellingham. Steve was born July 21, 1953 to Charles and Angelina (D&#8217;Andrea) Haffner. After spending his early years on various naval bases, his father... View Obituary & Service Information

The family of Steven Allen Haffner created this Life Tributes page to make it easy to share your memories.

It is with heavy heart that we mourn the passing on June 12,...