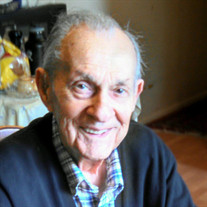 Spiros “Spedo” Southas went home to be with the Lord on May 14, 2017 in Bellingham, surrounded by his loved ones. A man of great honor, integrity, sense of community and love of family, he was strong until his last breath. Spedo was born April 6, 1923 in Everett, WA to Thanasis and Panagiotis Southas and had one older brother, Peter. He grew up playing many different sports but had a strong fondness and great aptitude for baseball. Upon graduation from Everett High School in 1941 he moved to Idaho to play professional baseball for the Twin Falls Cowboys. A year later in December 1942, Spedo enlisted in the United States Marine Corps and served during World War II. After his military service, Spedo went back into professional baseball before injury concluded his playing career. At this time Spedo was commissioned to the Washington State Patrol where he was stationed in Eastern Washington. In early 1947 while visiting home, Spedo met the love of his life, Anna E. Lallas. Later in the year, while visiting home, he took Anna on a dinner date and proposed to her that same night. They were married soon after, on October 14, 1947 and later had two children, Tom born in 1948 and Pamela born in 1951. As a career police officer for the Bellingham Police Department, Spedo worked in many positions including Chief of Detectives, and retired as Assistant Chief of Police. Spedo was also supportive of the youth of Bellingham in his role as Chief Juvenile Officer. Outside of his job responsibilities, Spedo coached the American Legion Post 7 Baseball team on a number of occasions. After retirement, he helped spearhead an ownership group that brought professional baseball to Bellingham and was part owner, business manager, and eventually General Manager of the Bellingham Mariners. He talked fondly of his time with future all-stars and hall of fame athletes when they were getting their start in baseball. As a result of his lifetime contribution to baseball, he was awarded the Northwest League’s Presidents Award in 1986 for his years of contribution to the league. In 2012 Spedo was an inaugural inductee into the Washington State American Legion Baseball Hall of Fame. After the Bellingham Mariners were sold, Spedo dedicated his energy and time to his beloved parish, St. Sophia Greek Orthodox Church. He served in many positions from Parish Council President to church Office Manager and helped the church navigate through a number of challenging times. Since 2010 he has enjoyed a very well deserved break from the active life he lived. He has enjoyed the past seven years surrounded by his wife, children and grandchildren who he cared so much for and who dearly loved him. He was always active and as recently as several months ago, at nearly 94 years of age, Spedo could be found raking leaves and trimming shrubs in his yard. Spedo did not stop moving or living life until his death. He truly lived his life to the fullest and epitomized love of family, community and friends, and was a man loyal until the end. He is survived by his wife Anna Southas, son Tom (wife Virginia) Southas of Bellevue, daughter Pamela (husband John) Olbrantz of Salem, OR, grandson Aaron Olbrantz of Bellingham and granddaughter Sarah Olbrantz of Salem, OR. He was preceded in death by his parents and his brother Peter. Memorials may be made to the National MS Society at www.nationalmssociety.org/Donate. A Trisagion Prayer Service will be held at Westford Funeral Home at 7 PM on Sunday, May 21. A Funeral Service will be held at St. Sophia Greek Orthodox Church in Bellingham at 11 AM on Monday, May 22. Committal will follow at Bayview Cemetery. Reception following at the church. You may share memories with the family at www.westfordfuneralhome.com.

Spiros &#8220;Spedo&#8221; Southas went home to be with the Lord on May 14, 2017 in Bellingham, surrounded by his loved ones. A man of great honor, integrity, sense of community and love of family, he was strong until his last breath. Spedo... View Obituary & Service Information

The family of Spedo Southas created this Life Tributes page to make it easy to share your memories.