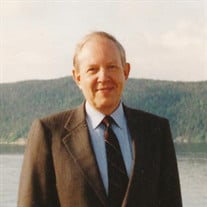 Sigitas J. Banaitis (or Sy as he preferred to be called), passed away on Tuesday, February 09, 2021 at the age of 84. He was born in Kaunas, Lithuania in 1936. Sy was the grandson to Saliamonas Banaitis, who was one of the signatories of the Lithuanian independence, the second person to sign the act of independence for Lithuania on February 16, 1918. He was also the nephew to the renowned Lithuanian composer Kazimieras Viktoras Banaitis, best known for the opera, Jurate and Kastytis. Sy’s early years were spent at an agricultural school of Zypliu Manor, that his parents founded, in the Sakiai region of Lithuania. In 1944, when WWII broke out in the region, the school where they lived was turned into an army field hospital and became closer to the war front lines. Because of the war, he did not have many happy childhood memories from that time. Due to the war in Lithuania, it was evident that it was their time to leave. They escaped in the middle of the night, taking with them what little belongings they could in a wagon drawn with 2 horses. They traveled for 6 weeks to reach the German border where refugees were being admitted. The war ended in Germany in 1945 when he was 9 years old. He lived in a refugee camp in Munich, Germany with four other families in one military squadron room, separated only by hung sheets. He lived in the camp from 1945-1950 and continued his studies at the school which his parents and other Lithuanian professors organized. Unfortunately, his father passed away in 1948 in Munich, Germany. In 1950, Sy along with his grandmother, mother, sister and other extended members of the family immigrated into the United States and settled in Cleveland, Ohio. He and his family later moved to Chicago, Illinois where he finished high school while working part-time at Minnesota Mining and Manufacturing Company (3M). He later was drafted and served in the US Army. After serving in the Army, Sy worked while going to school at night at Southern Illinois University where he received his Bachelor of Arts in Chemistry and Philosophy. In 1967, Sy married Daiva Audenas, a Lithuanian, whom he met on a blind date. He worked the next decade at various chemical companies while attending Indiana University where he received his Master of Business Administration in 1973. Then he started working at various large banking institutions that required him to travel around the world. One of them was the 1st National Bank of Chicago where he was a bank manager specializing in international banking. Later he became a Vice President at Merchant Bank, where his talent was recognized and the bank sent him to work in Geneva, Switzerland for a few years. The bank later transferred him to a new executive position in Dallas, Texas. In 1980, Sy accepted a position as Vice President for the Bank of California in Portland, Oregon. He and Daiva lived most of their married life in Wilsonville, Oregon where they made many friends and were actively involved in the Lithuanian community. In 1989 Sy founded his own company, Prolong Systems Inc. The company provided specialized temperature controlled shipping containers for which the company owned several patents. The containers were used to transport fruits and vegetables from various countries to preserve their natural state. In addition to dealing with all the facets of his own company, he continued to travel the world giving lectures and seminars on financing international commodities. After 30 years living in Wilsonville, Oregon, Sy and Daiva decided to finally retire and move into a lovely community in Lynden, Washington. He enjoyed traveling around the world during his retirement, fishing, entertaining guests at his home while sharing his most cherished stories. However, he most enjoyed time that was spent with his wife Daiva. Additionally, Sy felt a strong sense of responsibility to retain the legacy of his grandfather Saliamonas Banaitis to future generations of present Lithuania. He contributed to the publication of 2 books in Lithuania describing his grandfather’s accomplishments. He also established a scholarship at Vytautas Magnus University in Kaunas, Lithuania to sponsor future historical research about his grandfather. Sy Banaitis was preceded in death by his father, Justinas Saliamonas Banaitis, mother, Maria Mickeviciute Banaitis, sister, Ramute Banaityte Hennings and is survived by his wife, Daiva Audenas Banaitis, nephew-godson, Hernando A. Hennings, niece, Yvette Hennings Berg and her husband, Steven L. Berg, brother-in-law, Hugo H. Hennings, cousins, Gintare Ivaska and her family, Daina Maria DeTorok , Tom Gudauskas and his family, along with many close cousins and friends around the world. A live-streaming memorial service to honor Sy will be held on Wednesday, February, 17 at 1 pm PST with Kim Wagner officiating. VIEW LIVESTREAM HERE-https://youtu.be/knhBfu9-az8

Sigitas J. Banaitis (or Sy as he preferred to be called), passed away on Tuesday, February 09, 2021 at the age of 84. He was born in Kaunas, Lithuania in 1936. Sy was the grandson to Saliamonas Banaitis, who was one of the signatories of the... View Obituary & Service Information

The family of Sigitas "Sy" Banaitis created this Life Tributes page to make it easy to share your memories.

Sigitas J. Banaitis (or Sy as he preferred to be called), passed...