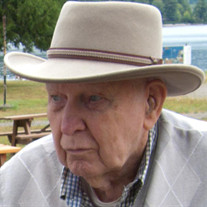 Born Nov, 23, 1923 in Start Up Washington to Hugh Daniels and Dora Kager Daniels. Died Dec. 8, 2014 in Bellingham, Washington. After graduating from Sultan High School, Shirley went to work for the then State of Washington Division of Forestry, later to become the Department of Natural Resources. One year later, Shirley joined the US Navy, where he served as a signal corpsman in both the Aleutian Islands and the South Pacific theaters. After discharge from the Navy, Shirley returned to work for the State Forestry Service. He married Dixie Jean Bonine in Sultan on Nov. 7th, 1947. Shirley was transferred to the Deming office in 1953. During his service in Deming, he was promoted to District Administrator where he oversaw the building of new headquarters on the Mt. Baker Highway near Smith Rd., the transfer of the old DNR property to the Nooksack Nation, the construction of the Entwistle lookout tower above Lake Samish, and helped with the 6th grade forestry tours. After the DNR consolidated operations in 1965, Shirley transferred to the Sedro Woolley office where he became the Assistant Area Administrator, overseeing operations in Whatcom, Skagit, San Juan and Island counties, the position he retired from in 1978. After several failed attempts by the Mt. Baker district to pass a much needed school levy, Shirley was elected to the Mt. Baker school board in 1962. He directed the school board to be more forthright about the necessity of the funding. The district never failed to pass a levy during his time on the board, from which he retired in 1974. After retirement from the DNR, Shirley worked for Colonial Reality for 15 years where he enjoyed helping many families find their dream home. Shirley was preceded in death by his parents Hugh & Dora, brothers Dean and Jim, sister Patricia Cotterall and son Brian. He is survived by his wife of 67 years, Dixie and sons Shirley Jr (Dan) wife Andrea, Hugh wife Ruth, Jim partner Chelle Foglesong, daughter Cindy Kruger and daughter-in-law Joleen Daniels, 12 grandchildren and 8 great-grandchildren. The family would like to extend a special thank you to Chelle and Joy for their loving care during Dad’s final days. A Celebration of Life will be held at 1:00 PM, Saturday Jan. 10, 2015 at Faith Lutheran Church. Memorials can be made in Shirley’s name to either Faith Lutheran Church or the Seattle Compass Center.

Born Nov, 23, 1923 in Start Up Washington to Hugh Daniels and Dora Kager Daniels. Died Dec. 8, 2014 in Bellingham, Washington. After graduating from Sultan High School, Shirley went to work for the then State of Washington Division of Forestry,... View Obituary & Service Information

The family of Shirley Russell Daniels created this Life Tributes page to make it easy to share your memories.