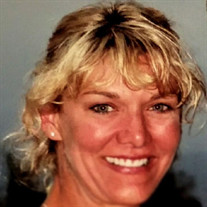 Sherri TenHouten-Snider was born March 15, 1964 in Traverse City, Michigan. Sherri’s love story with her husband, Rock, began when she was five years old. She chased him around Cadillac, Michigan until she was 18 years old, when they had their first official date at Rock’s little niece Tanya’s 1st birthday party- which began their lifelong adventure. Rock and Tanya were by Sherri’s side when she passed away May 9th in her home in Bellingham, Washington. Sherri and Rock left Michigan in 1987 heading west without a compass and eventually ended up in Seattle. Sherri woke up and asked, “Now what?” Rock replied, “Well, let’s go north. In Michigan everything is cool up north.” They made their home in Bellingham. Skiers, bike riders, paddlers, and trail blazers, they lived each day to the fullest. From Winthrop to Whistler they knew most of the trails and spent many incredible days on the slopes of Mount Baker. Her gregarious nature spread throughout her community. Many knew Sherri from Starbucks, to the trails of Bellingham with multiple dogs on and off leashes, to adopting homeless pigs and making sure they were fed. Sherri’s laughter filled any room she entered. She would make people smile by giving them a simple compliment which was always genuine and straight from the heart. Her love for people and animals is the legacy she leaves. Surviving just shy of six years, through a courageous battle against ovarian cancer, Sherri gave stubbornness a new name. Tenacity, positive attitude, faith and resolve provided her with the means to fight back. With grace and strength she took this insidious disease on and left us all amazed and inspired. Her journey continues to the “Rainbow Bridge” where tails will be wagging, pigs will be snorting, and her spirit will prevail. Sherri is preceded in death by her sister Terri Ann (TenHouten) Swanson. She is survived by her husband, Rock Snider of Bellingham, WA; her father: Edward W. (Denise) TenHouten of Cadillac, MI; her mother: Joanie Neiswonder of Torch Lake, MI; her brother: Edward S. TenHouten of Kingsley, MI; her Aunt and Uncle Al and Elaine Hendrickson of Coral Springs, FL; and her furbabies North and Solstice. Cremation has taken place, and a memorial service for friends and family will be scheduled in Michigan later this summer. In lieu of flowers, donations can be made in Sherri’s name to Whatcom Humane Society, Pig Peace Sanctuary, and Whatcom Hospice. You may share memories with the family at www.westfordfuneralhome.com.

Sherri TenHouten-Snider was born March 15, 1964 in Traverse City, Michigan. Sherri&#8217;s love story with her husband, Rock, began when she was five years old. She chased him around Cadillac, Michigan until she was 18 years old, when they had... View Obituary & Service Information

The family of Sherri TenHouten-Snider created this Life Tributes page to make it easy to share your memories.