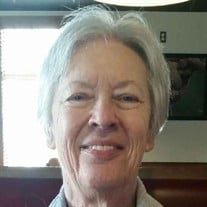 Sharon Lynn Prieve passed away at Silverado Bellingham Memory Care Community on April 13, 2018, at the age of 72. Hospice compassionately assisted with Sharon’s care during the last 10 days of her life. Sharon was born in Baraboo, Wisconsin to George and Irene (Hecock) Hutter and spent her early years in Prairie du Sac, Sauk City, Briggsville, and Lake Delton in south central Wisconsin and graduated from Wisconsin Dells High School in 1963. She began her college education at Wisconsin State College, (now university) Platteville. Sharon married Richard “Dick” Prieve on December 30, 1968 in Dubuque, Iowa. They moved to Bellevue, Washington where Sharon worked for Weston International Hotels for a year before returning to finish her Bachelor of Arts degree at the University of Washington in 1972, where she majored in editorial journalism. Sharon worked as a reporter and editor at the Bellingham Herald from 1973 to 1978 and 1988 to 1989. She and Dick were business co-owners/operators of a motel in eastern Washington from 1978 to 1988 then returned to Bellingham. Sharon began working for a local law firm for six years, 1990 to 1996, while she continued her education at Whatcom Community College, earning a degree in Paralegal Studies in 1991. After retiring from her professional life Sharon, much to her enjoyment, continued working in her wonderful herb and flower gardens on the five acres she and Dick owned in rural Whatcom County. Sharon was active in the Washington State Ombudsman program and served as a volunteer Ombudsman at Christian Health Care Center in Lynden for over eight years. Sharon enjoyed gardening, cooking wonderful dinners for friends, jogging, walking, and traveling throughout the United States and the world. She is survived by her loving husband of 49 years, Dick; her brother, Gary John Hutter, (Trudy), their two daughters Nicole Nelson, (Jeremy), their daughter, Hanna; and daughter, Jessica, (Sam) and their daughter, Millicent. A celebration of Sharon’s life will be held at Westford Funeral Home Chapel, 1301 Broadway, Bellingham, WA, 98225 at 11 AM May 19th, 2018 with a reception to follow in Broadway Hall. In lieu of flowers, donations may be made to Alzheimer’s Society of Washington, 1301 Fraser Street, Suite A-1, Bellingham WA 98229 or Whatcom Hospice Foundation 2901 Squalicum Parkway, Bellingham WA 98225. You may share memories with the family at www.westfordfuneralhome.com.

Sharon Lynn Prieve passed away at Silverado Bellingham Memory Care Community on April 13, 2018, at the age of 72. Hospice compassionately assisted with Sharon&#8217;s care during the last 10 days of her life. Sharon was born in Baraboo, Wisconsin... View Obituary & Service Information

The family of Sharon Lynn Prieve created this Life Tributes page to make it easy to share your memories.