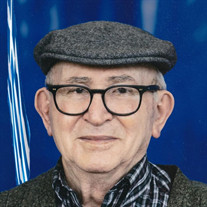 Savvas Ilvanakis, age 91, passed away in Bellingham on Wednesday, December 29, 2021. He was born July 26, 1930 in Kavala, Greece to George and Efthalia Ilvanakis. After graduating high school, he completed his associates in business. He then served as a lieutenant in the Greek Army. He often referred to his military days as giving him strength and courage. Soon after he immigrated to Canada to join his brother Gus. He spent time in Winnipeg and Toronto before moving to Kitimat, B.C. where he worked at Alcan Aluminum. In 1970, he moved to Bellingham where he worked at Intalco Aluminum and soon after married Ermioni Zafiropoulou. Over the years, he spent his time traveling with his family and volunteering with the St. Sophia Greek Orthodox Church. He enjoyed cooking for his family and others, gardening, horse racing, and watching sports. Savvas enjoyed telling great stories about his life experiences. After retiring in 1996, he spent his days gardening, cooking, and socializing with friends. But, most importantly, he enjoyed spending time with his son, George, daugther-in-law, Salouma and grandchildren, Savas and Eirmioni. Savvas was proud to become an American citizen in 2018. He spent the last three years at Solstice Senior Living where he made many new friends. Savvas was was preceded in his death by his siblings Theodore, Maria, Despina and Gus. He is survived by his son George (Salouma) Ilvanakis and their children Eirmioni and Savas, and many loving relatives and friends. Funeral Services will be held at St. Sophia Greek Orthodox Church on Wednesday, January 5th at 11:30 AM. Burial will follow at Bayview Cemetery. You may share memories with the family at www.westfordfuneralhome.com.

Savvas Ilvanakis, age 91, passed away in Bellingham on Wednesday, December 29, 2021. He was born July 26, 1930 in Kavala, Greece to George and Efthalia Ilvanakis. After graduating high school, he completed his associates in business. He then... View Obituary & Service Information

The family of Savvas Ilvanakis created this Life Tributes page to make it easy to share your memories.

Savvas Ilvanakis, age 91, passed away in Bellingham on Wednesday,...