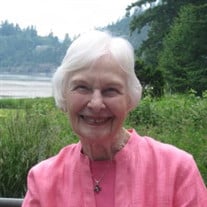 Robey was born to Bryan and Elfredia Neely on February 4th, 1921 in New Orleans, LA. Her birth name was Rosebud, named after her Aunt Rose & Uncle Bud. She had one sister, Elbry, and her grandfather and grandmother operated a department store in New Orleans, LA called Bohnstoff's Mercantile. She attended college at Gulfport Junior College in Gulfport, Mississippi. After graduating, she moved to Washington, D.C. where she worked at the Pentagon as a secreta ry for an Air Force general. In 1943, while driving with a girlfriend on Skyline Drive in Virginia, she met the man of her dreams, Leslie Troutman. “Les” was in the US Navy and was stationed in Washington, D.C. as well. They fell madly in love and were married shortly thereafter in 1944. They moved to Cambridge, MA while Les was still in the Navy and studying electrical engineering at MIT. It was war time, and Les was ordered to be relocated to the Bremerton Naval Shipyard in Bremerton, WA. They moved to Bremerton, where they bought their first home: a log house on the Kitsap Peninsula. Their first child, Bryan, was born there in 1945. When the war ended, they moved back to Newton, MA, where they had their second son, David, in 1948. Les continued the pursuit of his electrical engineering d egree at MIT while Robey was a full time mom. When Les finished his degree at MIT, the family moved to Malvern, NY on Long Island so Les could start his new job at Reeves Engineering. He worked there for five years before accepting a job at Belock Instrument Corp., a defense contractor for the Navy. In 1953, their third son, Paul, was born. A few years later they moved to Garden City, NY, and in 1960 their last son, Jim, was born. Robey was a full time mom and had her hands full raising four boys. As her boys grew up, she took a job at the nursery school affiliated with their church, and eventually became director of the school. Les had a change in jobs, and in 1976 they moved to Moorestown, NJ. About that same time, Paul moved to Washington State where he settled in Bellingham. After completing his commitment to the Air Force, Jim also relocated to Bellingham, and in 1994 Les & Robey moved to Bellingham as well. Les had retired, and they desired to be close to family and their youngest grandchildren. In 2001, Les graciously passed away. Robey kept herself busy with church and volunteer work at the Bellingham Crisis Center, Bellingham Senior Center, and at the First Congregational Church of Bellingham where she was active on the outreach and hospitality committees. She exercised regularly and did yoga to stay in shape. She was an active bridge player and enjoyed music by attending many live performances, and was a long time season ticket holder of the Whatcom Symphony Orchestra. She also spent a good deal of time chauffeuring her grandchildren to their sporting events, music & dance lessons, and attended many of their performances, recitals, and games. She continued residing in her condominium in the Cordata area until the Summer of 2014 when she moved to the Willows Retirement Home in Bellingham. She was having the time of her life at the Willows, but unfortunately her time there was cut short by a stroke forcing her to move to the Shuksan Health Care Center. She spent her last days at Shuksan where she made many new friends and experienced wonderful, loving, compassionate care. For that she was so thankful. Robey passed away peacefully in her sleep on August 29th, 2015 while under care at Shuksan Healthcare Center. She was blessed to have a wonderfully large family. In addition to her four successful sons and daughter in laws, she has 9 grandchildren and 10 great grandchildren scattered around the U.S. She will be missed dearly by her family, friends, and community. There will be a Memorial Service in Robey's honor on Saturday, October 10, 2015 at 2:00 PM at the First Congregational Church in Bellingham, WA.

Robey was born to Bryan and Elfredia Neely on February 4th, 1921 in New Orleans, LA. Her birth name was Rosebud, named after her Aunt Rose & Uncle Bud. She had one sister, Elbry, and her grandfather and grandmother operated a department store... View Obituary & Service Information

The family of Rosebud "Robey" Troutman created this Life Tributes page to make it easy to share your memories.

Robey was born to Bryan and Elfredia Neely on February 4th, 1921...