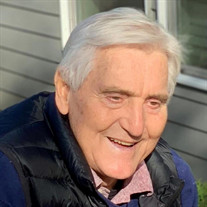 Roger Zejdlik, age 87, passed away at home in Bellingham on Thursday, April 7, 2022. He was surrounded by his loving family and caregivers. Roger was born on September 24, 1934 in East Grand Forks, MN to Frank and Marie Zejdlik. Roger’s roots are in the midwest, where his dad owned a gas station and he worked on the family farms that were homesteaded in 1888. From there, Roger’s life was a true story book of adventures that took place around the globe. Roger was born to have wings, or skis. After graduating in 1957 with a degree in Geology from the University of North Dakota, he attended St. John’s Seminary, completed a tour of duty in the Army, and then became a ski instructor in Austria and Switzerland, where he finally found the life he had always dreamed of: Traveler - Geodesist - Wanderer. As a Geodesist, Roger was employed by the U.S. State Department as an expert in satellite mapping. As one of the pioneers of using satellite tracking technology — the precursor to GPS — his work took him around the world. His first assignment was a four-year stint in Afghanistan in the 1960s, with four other Americans, training Afghans to map their highly nomadic country for the first time. His defense mapping project assignments included stations in Yemen, Iran, South Africa, New Zealand, Ethiopia, Portugal, the Seychelles, the Faroe Islands, Mauritius, Antarctica, St. Helena and many more. No continent went untouched as Roger traveled to exotic locales and negotiated diplomatic, and often dangerous situations. While many thought Roger would forever be a roving bachelor, in 1978, he took a serendipitous chair lift ride while skiing in Banff, Canada and met Cynthia Perry — whom he charmed into becoming his wife. No one doubts that marrying Cynthia is the best decision Roger ever made. A Registered Nurse, Cynthia joined Roger on his travels, all while authoring medical textbooks. Roger and Cynthia eventually settled in Bellingham, Washington with their daughter Gina and son Karl. Family was so important to Roger, however, he truly lived for his three grandchildren, Zara, Siena and Hayes. As a husband and dad, and as a “grandpappy”, he was always fun—so funny– ever faithful and always put his family first. His job took him to the ends of the earth and back again. He has traveled by jet airliner, military transport, schooner, on foot and by camel. He could regale you with stories of sleeping in a tent surrounded by technicians who only spoke Persian and Pashtu, befriending untamed wolves, worshiping alongside strangers, and getting caught in the crossfires of tribal warfare. It was for an act of bravery in such an instance that earned Roger the Purple Heart Award while on site in Afghanistan. Roger’s life was filled with rich experiences, and his stories will live on through his children and grandchildren. He lived a big, beautiful, challenging and faith-filled life. Roger was preceded in death by his parents, his sister Benedicta and brothers, Richard and Paul. He is survived by his wife Cynthia, son Karl Zejdlik, daughter Gina Zejdlik (Philip Bentley), grandchildren Zara, Siena and Hayes, sister Joanne Detjen and 13 nieces and nephews and their families. He was compassionately cared for by Eden Hospice. Mass of Christian Burial will be held at the Church of the Assumption on April 19 at 10:30 AM. A reception will immediately follow at the Church. You may share memories with the family at www.westfordfuneralhome.com.

Roger Zejdlik, age 87, passed away at home in Bellingham on Thursday, April 7, 2022. He was surrounded by his loving family and caregivers. Roger was born on September 24, 1934 in East Grand Forks, MN to Frank and Marie Zejdlik. Roger&#8217;s... View Obituary & Service Information

The family of Roger Charles Zejdlik created this Life Tributes page to make it easy to share your memories.

Roger Zejdlik, age 87, passed away at home in Bellingham on Thursday,...