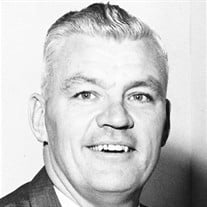 Dr. Roger C. Wiley, former professor and chair of the Department of Men’s Physical Education and Recreation at Washington State University died Saturday, February 14, 2015 at home, surrounded by family. The first thing anyone ever said to Roger, from his earliest years, was, “ You sure are tall!” And, even as a boy, he towered over his peers. Roger was born on February 4, 1924 to Lloyd and Alberta Wiley, hardworking folks in Bremerton, Washington. By the time he was in high school, Roger was 6’8” and head and shoulders taller than classmates, and eventually caught the eye of the high school basketball coach who talked him into coming out for the Bremerton High team, which Roger helped lead to Bremerton’s first-ever Washington State Boys Basketball championship, in 1941. After high school graduation, Roger became one of the first Washington state athletes to receive an athletic scholarship to an out-of-state school, the University of Oregon, where he went to to play basketball. His college career and education was interrupted by his desire to serve in World War II. He was told that he was was too tall for the Army so his family petitioned the War Department to make an exception so he could serve. His mother made all of his uniforms. After a stint at Fort Lewis, Roger served in the China-Burma-India theatre, helping build roads. After the war, Roger returned to the University of Oregon, where he played two more years of basketball and met his first wife, a tall, beautiful woman named Barbara Borrevik. Roger graduated with a Physical Education degree in 1949. After their wedding, they moved to Bend, OR where he taught Physical Education, and coached basketball and baseball. Three of their four children, Roger Jr., Brad, and Gloria, were born during this time. Later, Roger returned to the Eugene/ Springfield area so he could get his Masters and PhD at Oregon, while also teaching, coaching, and supervising the public swimming pool in Springfield. Their 4th child, Steve, was born during this time. After receiving his PhD in Physical Education in 1963, Roger and his family moved to Pullman, WA where he became the Department Chair of Men’s Physical Education and Recreation. For almost two decades, Roger remained in that position. He also evaluated Pac-8 Conference referees, worked to accredit other programs around the country, was very involved the Pullman Parks & Recreation program, especially in developing Little League. “Roger Wiley Field” is named in his honor. He was also active in the national organization for Physical Education educators, AAHPERD (American Alliance for Health, Physical Education, Recreation, and Dance), and was National President from 1975-76. In 1982-83 he was a visiting professor at West Point Military Academy for the academic year. After returning to WSU from West Point, Roger became very interested in computers and helped set up the first computer lab in the Department of Leisure Studies. He enjoyed mentoring graduate students and became the overseer at WSU’s Camp Larsen, a camp facility on Lake Coeur d’Alene, which served disabled children and adults. Roger was also an active Presbyterian, first in Pullman and later in retirement in Sequim, WA. Roger and his wife, Barbara, were known and loved as wonderful hosts in Pullman. Roger loved having people around, loved serving and caring for others. When he and Barbara retired to Sequim, they continued to host many friends who made the trek to see them. There was always popcorn and nuts, or crackers and Cougar Gold cheese ready for anyone who came through their door. After Barb’s death, Roger found a new love in his second wife, Thyrza. They were married on February 14, 1993 and had many happy years together, traveling across the country and the world, visiting family and going on elder hostels. Thyrza was a loving and faithful companion for Roger. In fact, he died on their 22nd wedding anniversary. Roger’s greatest joy, besides his “Bride” were his nine grandchildren. Each of them was his favorite. From the time they were small, Grampie’s large hands knew how to hold them, his large expressive mouth was ready with a grin when he saw them, and his lap always had room for them. The older they got, the more he proud became of their accomplishments, the more he just plain liked them. Preceded in death by his parents, his first wife Barbara, his daughter Gloria (Paul) Allard, and his stepdaughter, Lexi Knazovich. Roger is survived by his beloved wife, Thyrza of Baltimore, MD.; his brother Lowell (Shirley) of Bremerton, WA/Astoria, OR; his son Roger, Jr. (Helena) of Helsinki, Finland; his son Brad (Nichola) of Zillah, WA; and, his son Steve (Carolyn) of Bellingham, WA, step-daughter Mary Beth (John) Johnson of Columbia, MD, and step-son Michael (Georgia) Knazovich (Albuquerque, NM); nine grandchildren: Dominic, Rachel, Elizabeth, Jonathan, Jesse, Stephanie, Michelle, Paul, and Christian; and six great-grandchildren. A memorial service will be held on April 18, 2015 at 2 pm at Mountain View Presbyterian Church, in Marysville, WA. Donations can be made to SHAPE Washington; PO Box 766; College Place, WA 99324 (Attention: Roger C. Wiley Emerging Leader Scholarship fund)

The family of Roger C. Wiley Sr. created this Life Tributes page to make it easy to share your memories.