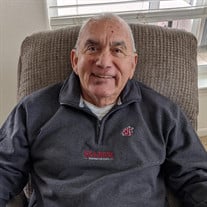 Rodney Wayne “Rod” Bruland, of Nooksack, WA, passed away Thursday, January 20, 2022 in Bellingham, WA. Rod was 77, born on October 25, 1944 in Seattle, WA to Violet (Balzer) and Arthur Bruland. He grew up in the Everson/Nugents Corner area and attended Mt. Baker High School, graduating in 1962, continuing to work on the family farm after graduation and racing with his brother Ron at Skagit Speedway during the mid/late 1960’s until 1971. After closing the family egg farm in 1971, Rod began his career as a union truck driver, first going to work for Wilder Construction, then Henifin Construction, then finishing out his 32 year career with LTI/Milky Way INC retiring in 2003. For a short time after retirement Rod filled in driving school bus for the Mt. Baker School District. Rod spend a great deal of time volunteering for his community, including 13 years as a Whatcom County Reserve Sheriff Deputy and 42 years as a volunteer Firefighter for WCFD1 from 1965 to 2006. His proudest accomplishment with the Fire District was overseeing the construction of the new Nugents Corner Station as the project manager. Rod was also a lifetime member of the Bellingham Elks Lodge 194, helping with many of their charities and holding many offices including Exalted Ruler. During retirement, Rod enjoyed going to coffee with the guys and especially coffee with his brothers every Friday morning. He enjoyed tinkering with and fixing up many cars and Honda Trail bikes that he would purchase (then sell to turn a buck!). Continuing his volunteer spirit, he helped his brother Ron on many occasions with the food bank runs and putting out US Flags on Main Street for the Lions Club on certain holidays. He always said he never ran out of things to do during retirement. He liked to stay busy. Rod was proud of his family and his children and their accomplishments. He was especially proud of his grandsons and supported them in any way possible. He LOVED his grandsons! Rod was preceded in death by his mother, father, and his sister Vivian Bruland and is survived by his wife of 52 years, Marilyn; son Kurt and his wife; daughter Juli (Margaret) Gallegos; four grandchildren, Landon, Connor, Gerrit and Grant Bruland; three brothers, Ron (Judy) Bruland, Rick (Diane) Bruland, and Ray (Jeane) Bruland; and many nieces and nephews. Memorials may be made to the Tall Elks, c/o Bellingham Elks Lodge, #194 or Whatcom Hospice. A visitation will be held Thurs., 1/27th and Fri, 1/28th from 2:00 p.m. to 4:00 p.m. at Westford Funeral Home. Funeral Services will be held 1:00 p.m., Sat. 1/29th at Immanuel Lutheran Church (masks required) with burial to follow at the Immanuel Lutheran Cemetery. There will be a reception at the church after the graveside service, with food and refreshments. You may share your memories of Rod at www.westfordfuneralhome.com.

The family of Rodney W. "Rod" Bruland created this Life Tributes page to make it easy to share your memories.