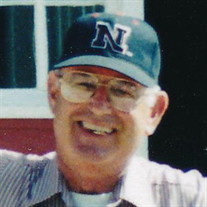 Robert Lee Schmidt passed away on Saturday, December 16, 2017 at the age of 78, in Bellingham, Washington. Robert (Bob) was born on August 29, 1939 to Delbert and Doris Schmidt in North Platte, Nebraska. Robert attended school in the small town of Tryon, Nebraska and went to North Platte High School. After high school Robert joined the United States Navy and served as an Aviation Boatswain’s Mate on the USS Wasp from 1956-1960. After his discharge from the Navy, Robert moved to Oregon and then to Seattle where he began his career in the International Brotherhood of Electrical Workers. Robert worked at Uniflight for many years and continued his career with the IBEW working on various projects for companies in multiple states including Idaho, California, and Alaska. After retiring, Robert briefly worked at Western Washington University in their maintenance department. Robert married Sandra Kayton in 1966, and moved to the Mosquito Lake Road in Deming in 1972 where he and Sandra raised two sons, Kurt and Dale. As active part of the community, Robert served as President of the Piranhas Wrestling Club, as announcer at Hannegan Speedway and was always lending a hand with his skills as an electrician and a handyman to friends and neighbors. Robert enjoyed competing in Team Roping with his horses, hunting, fishing and shooting, and also riding motorcycles. Robert loved spending time with his grandchildren, Darren and Megan. Robert is preceded in death by his wife Sandra, father Delbert, mother Doris, younger brother Dale, father-in-law Gene Kayton, mother-in-law Eloise Kayton, and brother-in-law, Royce Kayton. He is survived by his brother Delbert (Wilda) Schmidt, sister-in-law Loie Haggen, brother-in-law Gary (Jo Anne) Kayton, son Kurtis Schmidt, son Dale (Rebecca) Schmidt, daughter Janet Jarvis and his grandchildren, Darren Schmidt, Megan Schmidt, and Ellen Jarvis as well as numerous nieces and nephews. At his request, no services will be held. You may share memories of Robert at www.westfordfuneralhome.com.

Robert Lee Schmidt passed away on Saturday, December 16, 2017 at the age of 78, in Bellingham, Washington. Robert (Bob) was born on August 29, 1939 to Delbert and Doris Schmidt in North Platte, Nebraska. Robert attended school in the small town... View Obituary & Service Information

The family of Robert Lee Schmidt created this Life Tributes page to make it easy to share your memories.