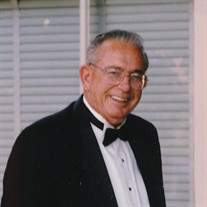 Robert C. Nunamaker, age 94, of Blaine, WA passed away peacefully on January 6, 2017. Bob was born to Clinton and Loretta Nunamaker in Conrad, Montana on September 25, 1922. He graduated from Bellingham High School in 1941, then proudly served in the US Army Air Force from 1942-1946. On November 1, 1947, he married Betty Peaster in Bellingham. Bob earned his teaching degree from Western Washington University. He then embarked on a 27 year career in education as a teacher and administrator, serving as principal of Blaine Elementary until his retirement in 1979. After retiring from education, Bob continued working for the US Immigration Service. Baseball was an important part of Bob’s life. He played infield for the Bellingham Bells from 1946-1964. Bob coached high school football and baseball as well as the Bellingham Bell-Jets semi-pro football team. He was a referee of football and basketball, and a baseball umpire for years. Bob was proud that his family was awarded Whatcom County Sports Family of the Year in 1986. Bob was also a talented musician, and began performing with the Clint Nunamaker Orchestra at the age of 14. He played music throughout his life with many local bands and musicians. He loved helping kids and others who were in need. Bob was preceded in death by his wife of 68 years, Betty, who passed away in August of 2016, and sisters Irene VanDeRiet and Peggy Kuykendall. He is survived by his loving children Kerry and husband Gary Clausen, Scott and wife Christine Nunamaker, Todd Nunamaker, Julie and husband Steve Sanders and Erin and husband Cris Johnsen; grandchildren Kristin and Kelli Clausen, Lindsay and husband Nick Barrett, Grant and wife Jaclyn Sanders, Conner and Colton Johnsen, Stella Nunamaker and Grace and Caroline Nunamaker; great-grandsons Callan and Torrin Sanders; and many loving relatives and friends. A service of remembrance will be held at the Blaine Performing Arts Center, 975 H Street in Blaine at 11 AM on Saturday, January 21st with a reception following the service. Memorials may be made to the Blaine Booster Club, P.O. Box 152, Blaine, WA 98231, or the Bellingham High School Band, 2020 Cornwall Ave, Bellingham, WA 98225. Dad was a champion for kids, quietly ensuring they have an opportunity to participate. You may share your memories with the family at www.westfordfuneralhome.com.

Robert C. Nunamaker, age 94, of Blaine, WA passed away peacefully on January 6, 2017. Bob was born to Clinton and Loretta Nunamaker in Conrad, Montana on September 25, 1922. He graduated from Bellingham High School in 1941, then proudly served... View Obituary & Service Information

The family of Robert C. Nunamaker created this Life Tributes page to make it easy to share your memories.