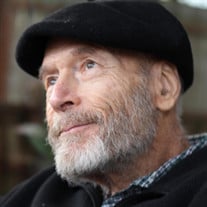 Robert Eugene Narum passed away Tuesday, February 25, 2020 in Bellingham after a long, slow decline due to Parkinson’s. Bob was born in Beatrice, NE to Eugene and Doris (Petrich) Narum on March 5, 1941. He attended the University of Colorado at Boulder, where he met his first wife, Marianne Lester Narum. Together, they raised three children in Idaho Falls, ID and Richland, WA. Following Marianne’s death in 1992, Bob married Dorothea Ott Ferris-Narum. In 2018, Bob and Dorothea moved to Bellingham. Bob was an excellent mathematician, but as his children and stepchildren quickly learned: don’t ask for help on calculus homework unless you want an hour-long demonstration on how to derive the equation. Bob had a passion for music and played his French horn for the CU marching band (including a trip to the Orange Bowl) and both the Idaho Falls and the Mid-Columbia Symphonies. Over the course of the years, he coached his children’s and stepchildren’s soccer teams. He loved backpacking, cross-country skiing, and photography. Bob was a man of few words, but he made those words count (often in the form of a pun). He was a dependable father, loyal friend and spouse, and the ultimate okay guy. Bob was preceded in death by his first wife Marianne Lester Narum in 1992 and is survived by his wife Dorothea Ferris-Narum; children, Steven Narum, Brigitta (Britta) Narum, and Travis Narum; three step-children, Jonathan Ferris, Julia Gage, and Keith Ferris; eleven grandchildren; brothers Richard and David Narum; sister Kathleen Bonfoey; and several nieces and nephews. He was loved and will be missed. A remembrance service will be held 11:00 a.m., Saturday, March 14th at Westford Funeral Home in Bellingham, WA. You may share your memories of Bob at www.westfordfuneralhome.com. In lieu of flowers, please consider donating to the Nature Conservancy in honor of Bob’s love of the outdoors.

Robert Eugene Narum passed away Tuesday, February 25, 2020 in Bellingham after a long, slow decline due to Parkinson&#8217;s. Bob was born in Beatrice, NE to Eugene and Doris (Petrich) Narum on March 5, 1941. He attended the University of Colorado... View Obituary & Service Information

The family of Robert Eugene Narum created this Life Tributes page to make it easy to share your memories.