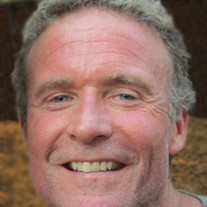 Bob Lafortune of Bellingham, WA passed away after a lengthy journey with cancer on December 29, 2019 at the Whatcom Hospice House surrounded by family. Bob was born on August 22, 1968 in Fayetteville, NC to Robert and Anne (Houghton) Lafortune. He graduated from North Clayton High School in College Park, GA and received a Bachelor of Arts in Public Relations from Georgia Southern University. He worked in sales for many years and eventually fulfilled a dream of owning a business by becoming a partner in Orlando Legal Document Services in Orlando, FL. Eventually selling his portion of the business he came to work for Michael Business Machines, Inc. in Bellingham, WA. Bob not only joined Michael Business Machines but was also privileged to be brought into their family. To know Bob was to know unconditional love. He loved the Lord, and was very spiritual. He was able to meet and marry his soulmate Kendra, who lovingly and selflessly cared for him throughout his illness. His daughters were everything to him and were the apples of his eye. He had a very large New Hampshire family that he was close to and who he loved very much. He and his sister will still say that New Hampshire is home. Bob is survived by his father, Robert (Romona Wood) Lafortune, Sr., his wife Kendra McMackin, daughters, Julia (Isaiah Stumpf) Lafortune and Grace Lafortune, step-daughters, Ginalyn (Ian) O’Guin and Mikelle Kelly, step-granddaughter, Seven O’Guin, his sister LouAnne (Dave) Norman, 2 nieces Courtney (Josh) Kopsie, Christine (Seth) Callaway, step-nephew David Norman, step-niece Jenny Lynn (Christopher) Brown, great-nieces and nephews, Kennedy, Cooper, Caden, Maclin, Everleigh and Analynn, many aunts, uncles and cousins as well as his loving dog, Nora. He was pre-deceased by his mother Anne Lafortune. Services will be held in Bellingham, WA, Jonesboro, GA and Bedford, NH. Memorials may be made to the American Cancer Society at https://www.cancer.org/involved/donate.html or to the Whatcom Hospice House at https://whatcomhospice.org/donate/. You may share your memories of Bob with the family at www.westfordfuneralhome.com.

Bob Lafortune of Bellingham, WA passed away after a lengthy journey with cancer on December 29, 2019 at the Whatcom Hospice House surrounded by family. Bob was born on August 22, 1968 in Fayetteville, NC to Robert and Anne (Houghton) Lafortune.... View Obituary & Service Information

The family of Robert E. "Bob" Lafortune created this Life Tributes page to make it easy to share your memories.

Bob Lafortune of Bellingham, WA passed away after a lengthy journey...