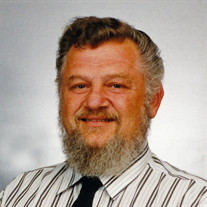 Bob Kloc, age 72 of Everson, WA passed away at home on Thursday, Oct. 29, 2015. He was born May 12, 1943 to Michael and Anthanette (Pecone) Kloc in Olean, NY. Bob is survived by his wife of 52 years, Janet; son Reginald Robert Reese whom he and Janet adopted on June 9, 2015; sister Patricia Burk and husband Chris of Sumas; niece Tina Sanders, sister-in-law Christine Kloc and her daughters Mia (Jesse) Leland and Haily Kloc; nephew Robert Kamps, his wife Lonni and their children Bobby, Jesse, Rebecca and Judith Kamps; cousin Marti Crisp and her children Brandi and Cody; his beloved dog Huey, and many other family members and friends. He was preceded in death by his parents, brother Michael Kloc and sister Mary Kamps. Bob worked at the YMCA, Wallace Poultry, and spent time fishing in Alaska. Following graduation at Bellingham High School, he attended WWU where he earned his Bachelor’s Degree and worked toward earning his Master’s. Bob served in the U.S. Armed Forces, and was honorably discharged in 1967. Following his service, he became a member of the American Legion, Post # 212 in Sumas, where he and Janet enjoyed being Mr. & Mrs. Santa Claus for nearly 30 years. Bob was a certified driving instructor and was also certified in teaching special education, he always had a special place in his heart for those who were developmentally delayed. He served on the Watsi board, and was certified member of the Whatcom County Community Emergency Response Team (CERT), where he was trained to help himself and others in disaster preparedness. He loved watching wrestling, western movies, pizza, and spending time with children, and helping with Job’s Daughters. Bob excelled in sports and loved animals and birds, which he fed from his deck at home. Upon moving into a nursing home, he enjoyed watching the squirrels gather nuts from outside his window. Those who wish to remember him with a memorial gift may contribute to the Alternative Humane Society (P.O. Box 2321, Bellingham, WA 98227), the Whatcom County Humane Society (2172 Division St., Bellingham, WA 98226) or the Wounded Warrior Project (P.O. Box 758517, Topeka, KS, 66675). There will be a Celebration of Life at 2:00 PM on Monday, November 30, 2015 at the Broadway Hall, 1300 Broadway St. in Bellingham.

The family of Robert Stanley Kloc created this Life Tributes page to make it easy to share your memories.

Bob Kloc, age 72 of Everson, WA passed away at home on Thursday,...