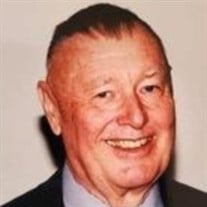 San Jose, California - Robert (Bob) Huggins passed away from natural causes in San Jose, California, on January 17, 2021. The only child of Arthur and Vivian Huggins, Bob was born in Bellingham, Washington on July 30, 1926. Growing up during the Depression, he developed lifelong interests in fly fishing, rolling stock and aircraft. After graduation from Bellingham High School, Bob served in the Army Air Corps during World War II. He attended Washington State University at Pullman and graduated in 1950 with a degree in mechanical engineering. Upon graduation, Bob married Marion Eileen Hardin, also of Bellingham. Bob and Marion were happily married for 62 years until her death in 2012. Bob spent his entire career at General Electric Company, initially at the Hanford Site in Eastern Washington. In 1955, he moved his growing family of three young children from Richland, Washington to San Jose, California. His fourth child was born in San Jose. Bob was one of the founding team of engineers to form G.E.'s Nuclear Power Division. Initially settling in San Jose's Willow Glen neighborhood, Bob and Marion designed and built a home on a beautiful property in the Almaden Valley with unobstructed views of Mt. Umanhum and the Loma Prieta mountain range. He would reside there for 58 years until his death. Bob's work required him to travel extensively, managing projects in Europe, Mexico, Japan, and the Eastern United States. He cherished weekends at home with family and friends and together with Marion, was a gracious and generous host. They would often entertain G.E. clients visiting from abroad in their home, exposing their curious children to different cultures. Upon retirement in 1987, Bob and Marion became avid travelers, visiting iconic locales across Europe, Asia and the Far East. In addition to overseas travel, they took frequent road trips across the United States, tracing their ancestors' migrations from the East Coast to the Pacific Northwest. He enjoyed golf, poker with his buddies, couples bridge games and historical nonfiction. Bob also enjoyed hiking the Almaden foothills, discovering abandoned quicksilver mines, and taking scenic drives throughout the county to assess the water levels in the local reservoirs. He is survived by his four children: Terry Huggins and her husband Steve Filson of Monterey, Michael Huggins and his wife Debra of Whidbey Island, Janet Holt and her husband Owen of San Jose, and Susan Huggins also of San Jose. The family wishes to express their appreciation to his caregivers for enabling their father to live comfortably and safely in his own home the past 18 months. They also wish to express their deep gratitude to the wonderful neighbors whose company Bob and Marion enjoyed throughout their lives. Bob will be laid to rest alongside Marion, adjacent to the Huggins and Hardin family plots, in Bellingham, Washington. WATCH SERVICE RECORDING HERE-https://www.youtube.com/watch?v=OxLxt2Sn0FM&feature=youtu.be.

San Jose, California - Robert (Bob) Huggins passed away from natural causes in San Jose, California, on January 17, 2021. The only child of Arthur and Vivian Huggins, Bob was born in Bellingham, Washington on July 30, 1926. Growing up during... View Obituary & Service Information

The family of Robert Arthur Huggins created this Life Tributes page to make it easy to share your memories.