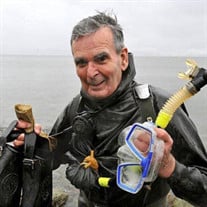 Robert “Bobby” Brown, age 92, of Bellingham, passed away peacefully on Sunday, February 21, 2021, surrounded by family in his home in Bellingham. Bob was born April 8, 1928 in Bellingham to John and Myrtle Brown. He married Jewel Dixon on Jan. 8, 1950 and together they raised five children. Bob and Jewel enjoyed traveling together, especially to Hawaii, to visit family. He was preceded in death by his loving wife in 2006, and is survived by their five children, Roy Brown (Noreen), Linda Klix (Klaus), Vicki McAlpine (Larry), Brenda Brown and Gloria Moniz (John) and two grandchildren, Amber Eddy (Daniel) and William Bond. He took delight in his grandchildren and great-grandchildren, Jayson, Madison, Dakota and Dominic. Bob held three jobs supporting his family, including Mt. Baker Plywood, working with his uncle, Fred Bulmer, in his aluminum casting factory on Alderwood Ave. in Bellingham, and as a skin diver for the reef-netters at Lummi Island for 60 years, starting in the early 1950’s, where he was affectionately known as “Bobby Brown”. His skindiving career was the one that stood out as being the best life lessons and reached the most people. Bob experienced life underwater nearly as much as life above water. His mind stayed sharp until the end when his body just got tired. His many stories are in a book called “60 Years of Diving”, which is in the final stages of completion. A celebration of Bob’s life will be held Friday, April 9th at 1 PM at the Lummi Grange Hall, 2215 North Nugent Rd. The Lummi Island ferry leaves the mainland every 20 min. Fare is $13 round trip for one car and passenger. Children younger than 19 are free. In lieu of flowers, donations may be made in Bob’s memory to The Lighthouse Mission or the Bellingham Food Bank. You may share memories in the online guestbook at www.westfordfuneralhome.com.

Robert &#8220;Bobby&#8221; Brown, age 92, of Bellingham, passed away peacefully on Sunday, February 21, 2021, surrounded by family in his home in Bellingham. Bob was born April 8, 1928 in Bellingham to John and Myrtle Brown. He married Jewel... View Obituary & Service Information

The family of Robert Elvis Brown created this Life Tributes page to make it easy to share your memories.