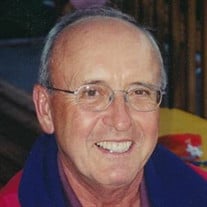 Robert A. (Broscovak) Brovak, former resident of Graham, WA, passed away Thursday, October 29, 2015 in Bellingham, WA. Bob was 79, born in Des Plaines, Illinois to Hazel (Hein) and William F. Broscovak. Bob was a member of The Lutheran Church of St. Paul in Graham, and was currently a member of Trinity Lutheran Church in Bellingham. Bob was preceded in death by brothers William and Richard Broscovak, and is survived by his wife Susan; son Mark (Julie) Brovak; daughter Amy (Ed) Fietz; 2 grandchildren, Robyn and Ryker Fietz; and brothers Raymond (Jodine) Broscovak and James (Sharilyn) Broscovak. Bob’s sales career started as a shoe salesman for his brother in the Chicago area. Later, he was employed by Eastern Airlines, eventually being transferred to the Pacific Northwest to help open a new station in the Seattle area. In 1976 Bob was employed by Perry Bros., wholesale food providers. This was the sales job that really brought out Bob’s passions for food and selling. He retired in 1996. As a young man, Bob and his brothers were avid bike racers. He brought home many trophies that he kept over the years. Besides his love for selling and cooking, Bob enjoyed hunting birds with his son, Mark, and his friends Rick, Randy, Alan and Dick. In addition, he enjoyed spending time with Amy and Ed as he watched his grandchildren, Robyn and Ryker, play soccer, baseball, fast pitch and volleyball. A memorial service will be held at 11:00 AM, Saturday, November 21, 2015 at The Lutheran Church of St. Paul in Graham, WA, 22419 108th Ave. E., Graham, WA 98338. Memorials may be made to The Lutheran Church of St. Paul in Graham, or a charity of your choice.

The family of Robert Allen Brovak created this Life Tributes page to make it easy to share your memories.