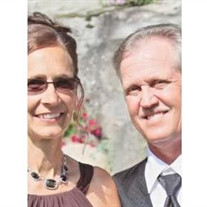 Bob and Gail were joined in marriage Feb. 17, 1979, in Chisholm, and passed away together July 11, 2015, on the Twin Sisters Peak in the North Cascades Mountain in Washington state. Bob, 62, was born Jan. 29, 1953, in Chisholm, to Richard and Gloria Nevalainen. He worked for St. Louis County for 39 years, retiring in 2010, and became the chairman of the Kabetogama Township where he helped accomplish many projects for the good of the community. He was an outdoor enthusiast with a gift of gab, so whenever subjects of fishing, flying or hunting were brought up, the conversation usually ensued for hours. Bob was enthusiastic about including others in his passion for flying. Gail, 58, was born March 11, 1957, in Sterling, Ill., to Harry and Blanche Stouffer. She was a stay-at-home mom until her three children entered school. Her love for children inspired her to become a paraprofessional for 17 years until she retired in 2014 to be "Nana" to her four grandchildren. Gail loved her rock garden, the outdoors and expressed her artistic talent through extravagant, handmade greeting cards. She had a gift of making a complete stranger feel like family and was an amazing and compassionate woman who would do anything for others. Her quick wit always brought a smile to your face. As a couple, Bob and Gail were residents of Kabetogama since 1972 and both volunteered on the Kabetogama Fire Department and EMS, as well as being very active in the community. They cherished their children, grandchildren, family and friends and were equally admired and loved beyond words. They will be deeply missed, and their absence will leave a void in the many lives they touched. Bob and Gail were preceded in death by their parents, Richard and Gloria Nevalainen and Harry and Blanche Stouffer. Bob and Gail's surviving family include their children, Chad (Sarah) Nevalainen, Kari (Cole) Hraban and Heather Nevalainen; grandchildren Kali and Brielle Hraban and Hunter and Harper Nevalainen; Bob's siblings, Terry (Tammy) Nevalainen, Cheri (Mike) Baron and Diane (Rick) Swearengin; Gail's siblings, Marcia (Mark) Stouffer, Keith (Kathy) Stouffer and Kenneth (Sophie) Stouffer; and many nieces and nephews. VISITATION: 9:30 until the 11:30 a.m. memorial service Saturday, July 25, in the International Falls High School gymnasium. A celebration of life will begin at 3:00 p.m. at Ash-Ka-Nam banquet hall on the Ash River Trail.

The family of Robert "Bob" Joseph and Gail Sue Nevalainen created this Life Tributes page to make it easy to share your memories.