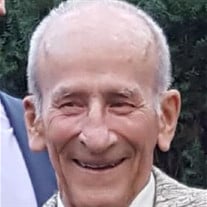 Richard LeRoy Vetter (Corky), of Bellingham, Washington and Surprise, Arizona died Tuesday, November 20, 2018 at age 90. He was born March 14, 1928 in Frances, Washington to Joseph C. and Anne (Strozyk) Vetter. Richard attended Willapa Valley High School and was an Eagle Scout. He graduated from Washington State with a B.A. in Business and an M.A. in Economics. He married his childhood sweetheart, Mary Jane Crogstad, in 1952. Richard received the Donald Kirk David Fellowship and graduated from Harvard Business School in 1954 as a Baker Scholar. He worked as an economist for Seattle First National Bank. Richard worked in finance for Scott Paper, Boise Cascade, and Omark Industries in Portland Oregon. He was a consultant for Ernst and Ernst, and CEO of Security Industries in Boise. At Morrison Knutson, Richard was a project manager for King Kahlid Military City in Saudi Arabia. He built Ovda Air base in Israel under the Camp David Accords and then worked in Egypt for the A.I.D. project under ITT. Richard retired in 1985 to the Costa Del Sol in Fuengirola, Spain. Upon returning to the states, he moved to Bellingham where he became "un-retired", working as a consultant for Maritime Contractors. For the last 20 years, Corky enjoyed Wintering in Arizona. He loved fishing, hunting, boating, and especially captaining the MariCork I and II with his first mate Mary Jane and many friends aboard. Corky was very active in the Bellingham Yacht Club. Richard was preceded in death by his parents and his brothers Donald and John Vetter. He is survived by his wife of 66 years, Mary Jane, his children Steven (Judy), Kevin (Cheri), Heidi (David Trant), and Gretchen (Sam Parrott), grandchildren Dana Wilkinson(Austin), Eric Vetter, Conner and Morgan Parrott, great grandson Lucas Wilkinson, and a sister Dorothy Anderson. He is also survived by many Kamb and Vetter nieces and nephews and Strozyk cousins. A Mass of Christian Burial will be held on Monday, November 26th at 11:00 a.m. at Sacred Heart Church. A memorial mass and celebration of life will be held in Bellingham at a later date. Memorial contributions may be made to your favorite charity. You may share memories with the family at www.westfordfuneralhome.com.

The family of Richard LeRoy "Corky" Vetter created this Life Tributes page to make it easy to share your memories.