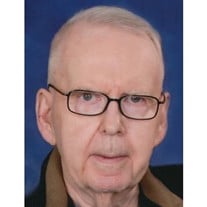 Richard Small, age 78 passed away peacefully in Bellingham on Friday, October 16, 2015. He was born to Chester and Mary (Kickhafer) Small on July 17, 1937 in Bellingham, WA. Richard graduated from Bellingham High School in 1955 and attended Western Washington College of Education (now known as WWU), obtaining his B.A. in Education. He completed his graduate studies at Oregon State University, receiving an M.A. in Industrial Education. His first teaching job was in Sacramento, CA in 1960, followed by teaching in Troutdale, OR, and later working at Mt. Hood Community College until he retired in 1995. Richard married Louella Vaughn in 1971 in Portland, OR. After her death in 1995, Richard moved back to his family home in Bellingham to care for his mother until her death. In 2000, he married Janet Quirt in Bellingham. Her two adult children, Sheri Quirt and Tina (Robert) Booth, and their daughter Laurel Booth, became his new family. He is survived by his wife Janet and her daughters, one granddaughter and cousins Stuart Prather of Palos Verdes, CA, Jeff and Vickie Prather and their son Noah of Blaine, WA, and Mark Prather of Blaine, WA. Richard had many interests and was actively in various organizations throughout his life. He enjoyed MG and Austin Healy sports car racing, sailing and maritime history and constructed “The Chester D”- a 20ft long steam-powered launch. He belonged to the United States Power Squadron, Whatcom Maritime Historical Society, Northwest Steam Society and Whatcom County Historical Society. He was an amateur radio operator, a member of the American Radio Relay League and became the first American Net Controller for the New Horizons Amateur Radio Net of Victoria, B.C. Richard was active in the Masonic Lodge #151, Order of the Eastern Star #58, and Royal Arch Masons. He worked in his fully equipped workshop creating and repairing all types of media. Sitting in the backyard of his family home viewing all the goings-on in Bellingham Harbor was one of his most loved activities. Memorials may be made to the Charles Rice Scholarship Foundation at WWU or Whatcom Hospice House. A Funeral Service will be held at St. Paul’s Episcopal Church at 1:00 PM, Wednesday, October 21st. Reception following. Fr. Jonathan Weldon will be officiating.

Richard Small, age 78 passed away peacefully in Bellingham on Friday, October 16, 2015. He was born to Chester and Mary (Kickhafer) Small on July 17, 1937 in Bellingham, WA. Richard graduated from Bellingham High School in 1955 and attended... View Obituary & Service Information

The family of Richard C. Small created this Life Tributes page to make it easy to share your memories.

Richard Small, age 78 passed away peacefully in Bellingham on...