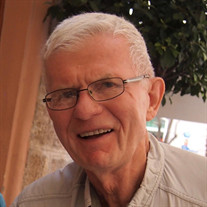 Richard E “Dick” Lyon peacefully passed away in the afternoon of 4 April 2018. He was born 26 December 1937 to Paul and Lucy Lyon of Yakima, Washington where he grew up with older brother Tom, younger sister Margaret, and younger brother Charlie. He enjoyed the mountains and the outdoors at an early age and showed great athleticism participating in both Track and Field, and Football through middle and high school. He graduated from Yakima Valley High School in 1956 and followed that up with a year of school at Yakima Valley College. In 1957 he enrolled in the University of Washington and joined the Navy ROTC program as a sophomore. He graduated in 1960, earning his Bachelors of Science in Ceramic Engineering, sticking around another year to earn his Masters degree. He was commissioned as an officer in the US Navy in the summer of 1961 and was immediately sent off to Quartermaster school and later assigned to the USS Vesole (DDR-878) a Navy Destroyer home ported in Charleston SC. During his duty on the Vesole he saw over 18 months at sea and his ship was instrumental during the Cuban Missile Crisis of 1962. After leaving the active duty Navy in 1964, while continuing with the naval reserves, he worked for the Hanford Nuclear Reservation doing Research and Development in nuclear fuels. Two years of this work was enough for him to know this was not his calling. He quit that job and also got married to his first wife Connie Phillips in 1965. They moved to Bellingham, Washington where he enrolled in WWU to earn his teaching degree. He started teaching at Nooksack Valley High School in 1966 where he taught math, science, and photography for 32 years. During that time he volunteered as an assistant football coach and taught drivers ed for many of those 32 years. In the late 70’s he had two children with his first wife. In 1981 their marriage ended and he later married Karen Melton in 1983 where they blended a family of five children. They continued to reside in Bellingham throughout the years enjoying their time with family, friends, hiking and camping. After retiring from Nooksack Valley, he and Karen moved to Yokota Air Force Base, Japan where he taught math and science at the DOD school on base. If that wasn’t enough, after several years in Japan, they came back to Bellingham where he taught five more years at Assumption Catholic school, finally retiring for good after 39 years of teaching. In 2007 they started to winter over in Green valley, AZ where they met many new friends and continued to share their love of the outdoors. He was a devoted, quiet, kind and gentle man who enjoyed his time with family, being outdoors and seeing the world. He was preceded in death by his parents and brother Charlie. He is survived by his brother Tom, sister Margaret, wife Karen, daughters Birdena, Kim, Sarah, Jessica, and son Josh along with 10 grandchildren. He will be missed by all, especially by those who called him Husband, Dad, Brother, Uncle, Grandpa and Friend. Join us for a celebration of life at 11 o’clock on 21 April 2018 at Faith Lutheran Church, 2750 McLeod Rd, Bellingham. There will be a light lunch and dessert following. In lieu of flowers, memorials in Dick's name may be made to your favorite charity

Richard E &#8220;Dick&#8221; Lyon peacefully passed away in the afternoon of 4 April 2018. He was born 26 December 1937 to Paul and Lucy Lyon of Yakima, Washington where he grew up with older brother Tom, younger sister Margaret, and younger... View Obituary & Service Information

The family of Richard E. "Dick" Lyon created this Life Tributes page to make it easy to share your memories.

Richard E “Dick” Lyon peacefully passed away in the afternoon...