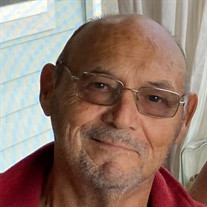 Richard Allen Dixon, age 83, lost his battle with Alzheimer’s; a battle he could not understand and could not win. He died peacefully at his home on Lummi Island, Washington, on November 23, 2021. Richard was a loved husband, Dad, Grandpa, Papa, Great Papa, and Uncle. He liked having his family around. He especially enjoyed watching the little ones play. He was a life-long learner, an avid reader, a philosopher always reading about and sharing new things of interest. He enjoyed solving challenging crossword puzzles. He had a photographic memory and a wealth of knowledge. He was our family’s source of information before it became so easy to Google. He loved to share what he was reading and enjoyed discussing many topics. Richard enjoyed cooking and was the family cook, famous with extended family for his special clam chowder. He loved music, especially classical piano. He was a master gardener and loved to golf and play handball with his buddies. Richard was born on March 31, 1938, to Howard and Mabel Dixon in Bellingham. He graduated from Bellingham High School, Class of ’55. He played basketball and baseball in high school and baseball for the Bellingham Bells. He attended the University of Washington and graduated from Western Washington College. He met his wife of 58 years, Carla Dixon, while they were both at Western. Richard served in the U.S. Army and was stationed in Alaska during the Cuban Crisis in the 1960’s. After his discharge from the Army, he moved to Iowa to attend Palmer College of Chiropractic. After graduation, he moved back to Bellingham and opened Dixon Chiropractic Office. He had an exceptional natural ability to feel what needed to be corrected and helped ease pain for many patients and family members. Richard had many fishing trips and crabbing experiences with his dad. During the summers of his early college years, he reefnetted with Johnny Brown on Lummi Island. It was during this time, while searching for eel grass for the reef nets, that he discovered Lane Spit on Lummi Island. His parents bought a lot and built a cabin. Richard inherited this property after his parents died. Richard lived on Lummi Island the last 28 years of his life, doing what he loved to do as long as he could. Richard was preceded in death by his parents, Howard and Mabel Dixon, his cousin-brothers and sisters-in-law, Loy and Bette Dixon, Billy and Doris Dixon, and great-granddaughter Hazel Homan. He is survived by his wife, Carla Dixon, son Casey (Laurel) Dixon, daughters Erin (Troy) Bassett and Jaime Dixon (Ford Monjure); 7 grandchildren Stan Dixon (Davah Dixon), Melissa Dixon (Dan Chin), Kamee Dixon (Brandon Homan); Jake Bassett, Brynn Bassett, Bryce Bassett, and Isabelle Rogers; 5 great-grandchildren Devin, Gabe, Major, Eva, and Royce. Richard often said that beside his dad, the most influential men in his adult life were his father-in-law, Archie Van Belle, and Uncle Lawerence Schilperoort. Though he was a little anti-social, he cared deeply for his family, extended family, friends and neighbors and they will all miss his naughty sense of humor and his tickled-with-himself laugh that was so like his mother, Mabel Dixon. You are invited to a celebration of Richard’s life from 1-3 pm, Sunday, December 12, 2021, at Squalicum Boathouse, 2600 S. Harbor Loop, Bellingham, WA. In lieu of flowers, please send donations to Lummi Island Fire Hall, 3809 Legoe Bay Rd, Lummi Island, WA 98262. You may share memories with the family at www.westfordfuneralhome.com.

Richard Allen Dixon, age 83, lost his battle with Alzheimer&#8217;s; a battle he could not understand and could not win. He died peacefully at his home on Lummi Island, Washington, on November 23, 2021. Richard was a loved husband, Dad, Grandpa,... View Obituary & Service Information

The family of Richard Allen Dixon created this Life Tributes page to make it easy to share your memories.