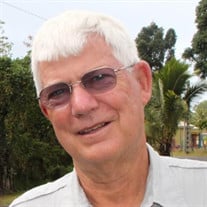 Richard “Dick” Charles Little, 78, of Bellingham, WA, passed away peacefully on Monday, February 1, 2021, at St. Joseph’s Hospital after battling pneumonia resulting from COVID-19. Dick was born January 8, 1943 in Seattle, WA to Harry and Margaret Little. Dick is survived by his loving wife of 55 years, Marie; his children, Karin Goodenough (Tom), Julie Goodman (Terry), and David Little (Jessica), and nine beloved grandchildren. He is also survived by his brother, David Little (Judi) and nieces Kris Jones (Steve) and Suzi Redman (Mike). Dick received his B.A. in education from Western Washington University and his M.A. from Portland State University. He had a 38-year career as a teacher/administrator in Beaverton, OR, Bellingham, WA and Arlington, WA. He coached a variety of sports throughout his career and was particularly fond of his time spent teaching at the Conservation Site in Bellingham. Being an educator was his calling. He loved various outdoor adventures including: skiing, golfing, sailing, boating, fishing, crabbing, and swimming. He served on the Mt. Baker Ski Patrol in high school and again when his children were young and was the life guard and swim instructor at Bayside Pool. He sailed in the Wednesday night races in Bellingham Bay and enjoyed fishing trips with dear friends and his son. Since retirement, he and Marie have cherished wonderful trips throughout the world. Dick was friend to all. He lived and loved wonderfully and deeply. His wife, children, and grandchildren were the great joys of his life. But most important to him was his love of God and calling to the church, Central Lutheran where he served on the board for many years. A memorial service will be held at a later date. In lieu of flowers, donations can be made in memory of Richard C. Little to Central Lutheran Church, 925 N. Forest St. Bellingham, WA 98225 or Whatcom Hospice at https://whatcomhospice.org.

The family of Richard "Dick" Charles Little created this Life Tributes page to make it easy to share your memories.