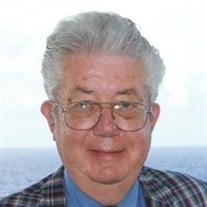 Pastor Leonard C. Ericksen peacefully passed to his eternal resting place in the presence of his family on Monday, September 23, 2019 in Bellingham, WA at age 82. He was born in Everett, WA on December 13, 1936 to Evelyn (Carlson) and Pastor Frank L. Ericksen. Faith and family values were of highest priority to Len. He is survived by his wife Bette of their home in Ferndale,WA. Len and Bette have three sons: David and his wife Nancy (Napa, CA), Donald and his wife Sara (Kalispell, MT), Douglas and his wife Tasha (Ferndale, WA). Their nine grandchildren were the love of Len’s life: Scott Robert and his wife Sarah, Ingrid Eleanor, Ryan David, Jared Frank, Leif Carlton, Callie Marie, Elsa Ann, Kirsti Evelyn, and Adele Elizabeth. Countless happy hours were spent traveling around the Puget Sound area and from Ferndale to California to Montana and back again numerous times to watch all nine of them participate in a variety of sporting and other activities. Len is survived by three brothers: Kenneth, Rodney, and Robert. He was preceded in death by his parents and his youngest brother John. Len has a host of nieces, nephews, cousins and countless friends and colleagues. Len attended schools Burlington, WA and then graduated from R.A. Long High School in Longview, WA in 1955. Len attended Pacific Lutheran University in Tacoma where he graduated in 1959. While at PLU, Len was “the voice” of PLU athletics and met his wife of 59 years, Bettelou Macdonald. PLU honored Len’s life work in 1983 by recognizing him as a Distinguished Alumni. After PLU, Len attended Luther Theological Seminary in St. Paul, Minnesota where he graduated in 1963. Pastor Ericksen’s legacy spanned more than fifty years of service and ministry. After serving parishes in Bigfork, Somers and Kalispell, Montana he and his family arrived in Bellingham in 1966 to begin what became 34 years of service to Central Lutheran Church and the Bellingham community at large. An important part of his ministry at Central was mentoring a total of twenty-five, third-year students from Luther Theological Seminary. Len served as the weekly host for “Anchor” on KVOS television for three decades. It was a topical discussion format which addressed ecumenical issues of faith, ethics, and community. Len was also active in the Bellingham Central Lions Club for his entire time in Bellingham and served them under the bestowed title of “Sky Pilot.” Len’s community engagement was not limited to religious issues. As one of his other passions and accomplishments, he was instrumental in the introduction of paramedics and the voluntary chaplain program to the Bellingham community. He was the pitcher on the Central Lutheran softball team until his retirement. From 2001 until 2010, Len served as the Director for A Christian Ministry in the National Parks (ACMNP) in Glacier National Park. Memorials may be made to The Pastors Frank, James, and Henry Ericksen Endowed Scholarship Fund at Luther Theological Seminary, the Pacific Lutheran University Lute Club, the Bellingham Support Officer Community Care or the charity of your choice. A service of remembrance and a reception will be held at 2:30 p.m., Sunday, October 6, 2019 at Central Lutheran Church with a graveside committal on Monday, 10:00 a.m. at Enterprise Cemetery in Ferndale. You may share your memories of Len at www.westfordfuneralhome.com.

Pastor Leonard C. Ericksen peacefully passed to his eternal resting place in the presence of his family on Monday, September 23, 2019 in Bellingham, WA at age 82. He was born in Everett, WA on December 13, 1936 to Evelyn (Carlson) and Pastor... View Obituary & Service Information

The family of Rev. Leonard C. Ericksen created this Life Tributes page to make it easy to share your memories.