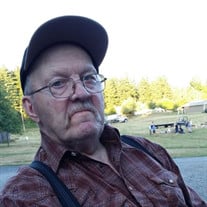 Raymond Harrison Zander, 86, died April 18, 2020, at home in Everson, Wash. He was born Aug. 25, 1933, in Bellingham, Wash., to Almer D. Zander, from Phoenix, Ariz., and Lucy T. (Harrison) Zander, from Birmingham, England. He grew up milking cows, doing other farm chores, and helping in a sawmill operated by his dad and uncle. Ray graduated in 1951 from Meridian High School where he was a member of the Future Farmers of America, which included showing his reserve grand champion Holstein at the Northwest Washington Fair in Lynden. He played high school sports. He graduated from Wenatchee Valley College in the early 1950s, majoring in agriculture. He later attended Washington State University. He was a member of the Washington Farm Bureau, a highlight of which was being part of a U.S. delegation to Bulgaria. He was a lifetime member of the Goshen Grange. In the mid-1950s he proudly served in the U.S. Army, first at Fort Carson, Colo., and later in a mortar platoon in the 25th Infantry Division at Schofield Barracks in Hawaii. He enjoyed a return trip to Hawaii in 2008. He married Linda Vevag March 14, 1959, and they started a dairy farm at Deming. Then for years they owned and operated dairy farms in the Sumas and Lynden areas. After retiring from dairying, Ray worked part time at a mink farm near Sumas and with his brother on a small Christmas tree farm in Lewis County. His hobbies included bowling, family picnics and softball games, playing pinochle and pruning fruit trees. He was a longtime Republican and devoted Washington State University fan (Go Cougs!). He attended the Goshen Community Church near Everson. He loved his family and friends and family gatherings. He had a friendly, sunny disposition and a good sense of humor. Ray is survived by his wife of 61 years, Linda, at home; his children, Robert, Tammy, Chris, Donald, and Michelle; granddaughters Diana, Ashly, and Mary; grandsons Jonathan and Timothy; brothers Al, Bellingham, and Larry, Toledo, Wash.; sister Laurel Melander, Aurora, Colo.; and numerous cousins and nieces and nephews. He was preceded in death by his parents, son Cody, numerous aunts and uncles, and Zander and Harrison cousins. A memorial service will be held on Saturday, July 25, 2020 at 2:00 pm at Goshen Community Church in Everson with a graveside service following at 3:30 pm at Lakeside Cemetery in Lynden. Donations may be made in his memory to Goshen Community Church. 6459 Mission Road, Everson, WA 98247 or Washington State University Athletics, P.O. Box 641602, Pullman, WA 99164-1602. You may share memories with the family at www.westfordfuneralhome.com.

The family of Raymond Harrison Zander created this Life Tributes page to make it easy to share your memories.