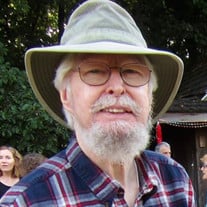 Ralph Thacker passed peacefully on July 6, 2020 after a sudden downturn in his health at 86 years old. He was comforted by his friends and the medical staff at Peace Health St Joseph Hospital in Bellingham and Christian Health Care Center in Lynden. He was the youngest of five children born to Lloyd Arnold Thacker and Alice Mae Cummins Thacker of Michigan. Ralph was born in the desert town of Lancaster, CA, grew up in the City of Glendale, and graduated high school there in 1951. He spent one year at Bethel College in St. Paul, MN and then transferred to BIOLA Bible College in Los Angeles, graduating in 1955. He continued his studies at Talbot Theological Seminary, graduating in 1958. He completed post-graduate studies at Hartford Seminary Foundation in 1962 and at the University of Hartford in 1970. He began his professional career in 1962 as a neighborhood social worker, living and working in Hartford’s minority community. Serving as staff for a citizens’ group, he organized two conferences on urban renewal, at one of which Robert Weaver, then Secretary of Housing, was the keynote speaker. Later, he worked at the Aetna Life & Casualty Company as Supervisor of the Personnel Department’s Supervisory Training Unit and then as Administrative Assistant to the head of the Corporate Data Processing Department. His subsequent professional and community work included serving as the Chairman of International Folk Dancing for the Greater Hartford Civic and Arts Festival in the late 1960’s and early 1970’s, in 1972 working at Hartford National Bank as Commercial Loan Officer, in 1981 at New England Savings Bank, and in 1984 at Federal Home Loan Bank of Boston as a Bank Examiner. In 1989 he joined Connecticut National Bank as Assistant Vice President in the Loan Administration Department. While living in the Hartford area, his avocations were genealogical research, folk dancing, classical music, and sailing. He also studied and taught courses on wolves, associated with the wolf sanctuary in Essex, MA. He kept a small sailboat at Sea Space, an idyllic spot in Fairhaven, MA, from which he cruised Buzzard’s Bay and Vineyard Sound. He also had occasions to travel to the Caribbean and Indonesia, and a cruise along the Pacific coast of Mexico. In 1998 he made a two-week trip to China, visiting friends in Chong Qing and taking the cruise down the Yangtze River to see the site of the Three Gorges Dam, then under construction. In 1995, Ralph took an early retirement and moved back to the west coast, settling in Ferndale, CA, near his sister Alice, his only surviving sibling. In late 2001, he relocated to Bellingham, WA, and found an apartment with a view of Harris Bay and Fairhaven, where he could enjoy the salt water and his love of sailing. He quickly became interested in the history of Bellingham and Fairhaven, and turned his research efforts to the life of Dan Harris, documenting the land claims and founding deeds, even recording Dan Harris’ will and probate records in Washington State and in California. Ralph intended to publish a series of booklets on Dan Harris’ life, the first of which entitled Dan Harris Meets the Press appeared in April of 2007. Ralph established the website dan-harris.info and placed the contents of six booklets there along with the titles of the two additional booklets needed to cover the life of Dan Harris fully. He also melded his Dan Harris research with his love of boats and built a replica of Dan Harris’ skiff based on the the only confirmed photo of Dan Harris. You can still rent this skiff from the Community Boating Center, which accepted Ralph’s donation of the boat. Meanwhile, Ralph became active in local community organizations, serving on the board of Fairhaven Neighbors, serving for a year as President of the Association of Bellingham Neighborhoods, and fully participating in the meetings of the Waterfront Futures Group, as well as other local efforts. One more international experience was the month in 2014 he spent in Guatemala developing a prospectus for a Guatemalan foundation to use in attracting major funding for archaeological excavations in the Mirador Basin, a million acre section of jungle in northeast Guatemala containing Mayan pyramids and over one hundred sites yet to be excavated and studied. His fluency in Spanish was valuable there. He was most recently engaged with Bellingham and Whatcom County leaders suggesting ideas for urban village and waterfront development, especially including Native American and international cultural representation. A spiritual thread was deeply intertwined through each stop on Ralph's life journey. His deeply held beliefs strengthened, and lingering doubts resolved over the course of the years leaving him finally at peace with his God and Savior. Ralph Thacker was preceded in death by his brothers Victor Eugene Thacker, Lloyd Arnold Thacker II , and Harold Arthur Thacker, and by his sister Alice Thacker D’Amelio Pieters. He is survived by his nieces, nephews, and cousins, who will miss Ralph’s regular phone calls and messages. He telephoned many in his circle just days before passing, celebrating the 4th of July holiday and anticipating better times. He touched countless lives both directly and indirectly, always gentlemanly, always with a gracious word. We can’t plan a celebration at this time, but will keep you informed when it’s possible. You may share your memories of Ralph at www.westfordfuneralhome.com

Ralph Thacker passed peacefully on July 6, 2020 after a sudden downturn in his health at 86 years old. He was comforted by his friends and the medical staff at Peace Health St Joseph Hospital in Bellingham and Christian Health Care Center in... View Obituary & Service Information

The family of Ralph W. Thacker created this Life Tributes page to make it easy to share your memories.

Ralph Thacker passed peacefully on July 6, 2020 after a sudden...