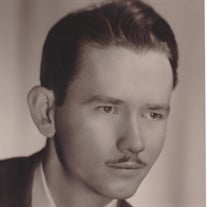 R. Barry Murphy of Bellingham, WA, passed away Tuesday, March 7, 2017 in Bellingham. Barry was 89, born December 17, 1927 in McCamey, TX, to Edward and Lucinda (Oliver) Murphy. Barry enlisted in the Navy at 17, and was a medic stationed at Balboa Naval Hospital in San Diego before becoming a naval corpsman with the Marines in the Pacific. After serving our country in World War II, he attended the University of Tulsa where he was the president of his fraternity, Alpha Tau Omega. Upon completion of his bachelor’s degree in English with a minor in Zoology, he went to France to work on his master’s degree. He started his career working in French Morocco, building a military base. Upon his return to the United States he worked for the Department of Defense as a contract administrator. His many assignments and titles included working on the Minuteman Site Modernization in Ogden, Utah; Chief of Plans and Administration; Deputy Chief of Quality-Processing and Control Division; Chief of Production Branch and Division; Chief of Contract Support Division Logistics Officer, and Chief of Plans and Management. During his tenure he and his family lived across the country in the following locations: Oklahoma City, OK; Topeka, KS; Knob Noster, MO; Palos Verdes, CA; Albuquerque, NM and Lake Forest, CA. Upon his retirement from the Department of Defense they remained in Lake Forest where he taught contract administration at Rancho Santiago Community College. He and his wife Dorothy then became entrepreneurs, opening a high end gift shop in Mission Viejo, CA. In 1990 they retired permanently in Bellingham. Barry loved to read, play the stock market, participate in archaeological digs with his friends in WA, and discuss business. He also spent his time volunteering - he helped by delivering donated blood to the airport so it could be airlifted to needy persons around the world, and he enjoyed volunteering at the Bellingham Visitors Center where he advised prospective citizens on the advantages of living in the Pacific Northwest. Barry and Dorothy also enjoyed overseas travel, visiting Australia, New Zealand, England, France and other parts of Europe. He was preceded in death by his parents. He is survived by his wife Dorothy of Bellingham; sons Kevin Murphy (Teri) and Martin Murphy (Sandy); grandchildren Brian (Caila), Melissa (Daniel), Harper, and Finian; and great-grandchildren Hudson, Abby and Stryder. Barry’s family wants to thank the wonderful and dedicated staff at Peace Health St. Joseph Medical Center and Mt. Baker Care Center where they made his last few months as enjoyable as they could be with their kind and compassionate care. Memorials may be made to a favorite charity. The Burial Office will be held 1:00 p.m., Friday, March 10, 2017 at Westford Funeral Home with The Rev. Jonathan Weldon officiating. Reception following at St. Paul’s Old Parish Hall. You may share your memories of Barry at www.westfordfuneralhome.com.

R. Barry Murphy of Bellingham, WA, passed away Tuesday, March 7, 2017 in Bellingham. Barry was 89, born December 17, 1927 in McCamey, TX, to Edward and Lucinda (Oliver) Murphy. Barry enlisted in the Navy at 17, and was a medic stationed at Balboa... View Obituary & Service Information

The family of R. Barry Murphy created this Life Tributes page to make it easy to share your memories.